What do you do after ten years as Prime Minister?

Well, you're questioned by the police about a possible cash-for-peerages scandal, naturally. Details here.
Posted by Thom Brooks at 4:33 pm No comments:

An interesting story here about the continuing drop of men enrolling at universities in the UK after finishing school. According to a study noted in the report, women are 25% more likely to attend university.
Posted by Thom Brooks at 2:54 pm No comments:

...as ranked by the European Science Foundation can be found here [see update]. The ESF divides journals into A, B, and C. Some examples:

The list is much better than previous incarnations, including certain journals of reputation and high standing excluded before. However, there are a number of oddities that remain. For example, it includes Hegel-Jahrbuch and Hegel-Studien, but not the superior Bulletin of the Hegel Society of Great Britain. Nor does the list include Journal of Social Philosophy or a variety of law reviews and politics journals that publish high quality work in philosophy, such as The Universityof Chicago Law Review and American Political Science Review.

There are also a few howlers: Legal Theory a B (and below Law and Philosophy)? Ratio isn't A? Philosophy a C?!?!?!?! Insane.

UPDATE: The link in the first line has been replaced by this new link here.

UPDATE: Link to the new list can be found here
Posted by Thom Brooks at 6:15 pm No comments:

I am pleased to announce the creation of a new Political Studies Association specialist group Global Justice and Human Rights. The group is led by Simon Caney (Oxford) and myself as co-convenors, Tim Hayward (Edinburgh) as treasurer, and Clare Heyward (Oxford) as secretary. The topic of global justice and human rights is of considerable contemporary interest. Issues, such as terrorism, just war theory, severe poverty and famine, climate change and environmental degradation, as well as the protection and safeguarding of human rights both in the United Kingdom and abroad, will clearly continue to be major areas of global concern for the foreseeable future. The Global Justice and Human Rights specialist group will aim primarily to create a new network amongst political scientists and others to foster and promote the study of these live issues of international affairs. The group will most likely be composed primarily of members working in political theory, although other subfields will be represented as well, such as comparative studies, development studies, and international relations to name a few.

I will post more information on our new website, as well as information on our first meeting provisionally set for next academic year at the University of Oxford. Meanwhile, I am constructing an email list of all persons interested in joining the group. If you or others you know would like to be on this list (and receive updates on group activities), then please contact me by email here. Membership is free---and you need not be a member of the Political Studies Association to join.
Posted by Thom Brooks at 1:08 pm No comments: 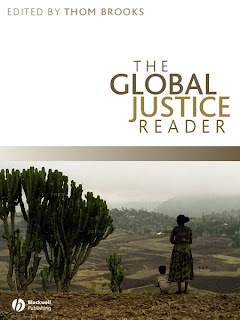 ....is just about finished and can be ordered from Blackwell's here. The blurb for the book is the following:

* Brings together key foundational and contemporary writings on this important topic in moral and political philosophy.

* Presents the writings of key figures in the field, including Thomas Hobbes, Immanuel Kant, John Rawls, Thomas Pogge, Peter Singer, and many others.

Posted by Thom Brooks at 7:05 pm No comments:

A number of notable people earned Honours from the Queen today, including the philosopher Myles Burnyeat (Cambridge) earning a CBE and the classicist Martin Smith (Durham) earning an OBE. No academic in political science earned honours this round.

In other news, I was delighted to see Christiane Amanpour from CNN and Liberty's Shami Chakrabarti both earn CBE's, and the great footballer Ryan Giggs earn an OBE.

A full list of the Queen's Honours can be found here.
Posted by Thom Brooks at 1:18 pm No comments:

The punishment of paedophiles

Today, the BBC has run the following story:

""Some child sex offenders should be encouraged to seek treatment rather than be sent to prison, the police's child protection chief says. Jim Gamble, of the Child Exploitation and Online Protection Centre (CEOP), said some offenders who viewed child porn could be given a police caution. He believes treatment in the community is a practical way of dealing with the huge scale of the problem. The CEOP was launched in April 2006 to tackle child sex abuse in the UK. Since then the centre has received almost 2,000 reports from the police, members of the public, children and other agencies about child exploitation. Some children's charities criticised Mr Gamble but he pointed out that cautions were already used to manage people who had viewed internet porn. That included 700 people who were convicted earlier this year as part of an internet child pornography inquiry, Operation Ore. "Not everyone does go to prison at the minute. Let's make sure the right people go to prison and let's manage the rest in a way that protects our children best," he told BBC News. Earlier Mr Gamble said the information flow on paedophilia was increasing massively. He suggested that to deal with the scale of the problem, some offenders should receive a police caution and then be managed within the community. "We shouldn't be sending everyone that ever commits an offence - particularly of the viewing kind - to prison. "There are people who have been dealt with by police caution who can be dealt with successfully in a way that allows them to maintain their lives and their families." Mr Gamble said he was not referring to paedophiles who committed violent offences like the rape of a child, but he insisted that some offenders "at the beginning of the spread of abuse may benefit from a police caution and can be managed". He said: "We've got to create an active and real deterrent that diverts them (predators) from committing this offence before they do, and that's something that we're really focused on. "If you're an offender, our message to you today has developed to a stage whereby we're saying 'for goodness' sake, go and get help before you get caught'." Ray Wyre, director of RWA, an independent child protection group that aims to help to rehabilitate sex offenders, said that not everyone who downloaded child pornography was a paedophile. "They see a sentence under pictures that says 'three virgins', or something like that, and they get curious as to what that is, and they download it. It's that easy to have illegal images on your computer." He said people who downloaded child porn were already being given cautions, which led to social services only allowing the offender to have supervised contact with their own children. But Michele Elliot, director of Kidscape, said people who view child pornography should not escape jail. "They are just as guilty as the person taking the photos. If they did not view the child would not be abused, therefore I think these people deserve prison," she said. The Sun's managing editor Graham Dudman told BBC Radio 4's Today's programme that people's reaction to Mr Gamble's comments would be "bafflement, outrage and anger". "Viewing is the same as arranging or taking these photos. If we cannot protect our children by sending predatory paedophiles to prison then we have truly lost the plot." Research by the National Society for the Prevention of Cruelty to Children (NSPCC) found that 16% of women and 7% of men claimed to have been sexually abused involving physical contact before the age of 12. That suggests that one in nine pre-teenage children has suffered abuse. The research helped to launch the charity's "full-stop" campaign to counter child abuse.""

My comments? Well, I am quite sympathetic to Gamble's arguments. The horrendous state of our criminal justice system is a result of thinking that putting people in prison for X number of years is a solution to all of society's ills. Nothing could be further from the truth. Sending someone to prison rarely makes them a better person upon release. Violent criminals must be restrained and I am not against the use of prisons where imprisonment is appropriate. I do think it is wise to reconsider our ability to rehabilitate offenders. It is bad enough that a crime took place. Lives are changed forever. It makes no sense to increase the misery. Victims need much, much more support from the government and criminals need much, much more support, too.
Posted by Thom Brooks at 2:27 pm No comments: