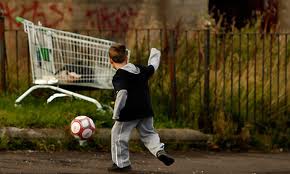 It was not to be this way. After many assurances about the potential impact of austerity measures -- cuts that have only just begun -- we now find a report from the widely respected Institute for Fiscal Studies (IFS) that confirms a steep rise in poverty figures with incomes for 'middle' families facing their biggest drop since the 1970s. There will be 1.3 million more children in poverty by 2013, or so the IFS predicts.

These figures may surprise -- perhaps even alarm -- some, but they are not entirely surprising. The government is taking a big gamble that must pay off. Here is the trick. They would probably have had some similar "guesstimate" about likely poverty should austerity measures kick in and not much else change. The numbers would have been sobering, but the gamble is that a more frugal state will attract greater investment and financial confidence leading to improved growth. So -- while no one would want to be heard making the argument this crudely -- temporarily pain on this scale might be acceptable given the (hoped for) great benefits that will come down the line.

The problem for the government is that it's unclear what more can be done to improve confidence. Plus, they have a relatively short amount of time to see a reversal in financial fortunes. The gamble is that the poverty to come will be largely eradicated by the time of a general election, but this will entail both that the economy will rebound and that the coalition will stand together long enough to see this parliament out.

If the gamble fails, then this will be a disaster for the government and its attempt to "de-toxify" the Tory brand with some parts of the electorate. Curiously, one wild card in all of this is the Olympics. If they go well, then it may help provide the right boost at the right time for the government and improve consumer spending. If things do not go to plan, then it will make efforts twice as difficult.

So it's everything to play for. There should be little surprise by today's announced numbers. The unknown unknown is whether this is relatively temporary -- or the beginning of a long political headache for the government. Watch this space . . . .
Posted by Thom Brooks at 8:49 am