STATEMENT: Hillary Clinton will recover from pneumonia, but will she heal damage on trust to her reputation? #FluGate

·         Everyone gets pneumonia. Not everyone lies about it – or tries to make people think it’s something else.


·         Health and stamina are important issues for US Presidential candidates. The job is exhausting and requires being in good physical shape.


·         Pneumonia isn’t the plague. Hillary will make a full and swift recovery from that.


·         The main point is whether she can recover from the damage done to her reputation.


·         Serious questions have been raised about the use of her personal email account while she served as Secretary of State. Donald Trump has questioned whether the public can trust her.


·         Hillary’s getting pneumonia should have been trivial. But her team’s poor handling of this issue has brought to the centre of this bitter presidential debate raising new questions about trust and honesty.


·         This is not an issue any candidate wants debated with less than two months to go to the election.


·         The election is still Hillary’s to lose, but she’s not making it any easier through unforced errors like this.
Posted by Thom Brooks at 9:04 am No comments: 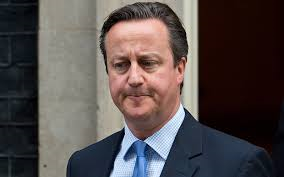 ·         David Cameron is – in many ways – a great success. He revolutionised the Conservatives into a new look (complete with new tree logo) modernised political party that brought an end to the Blair-Brown years under Labour.


·         Cameron’s greatest triumph was probably in defeating the polls ahead of the 2015 General Election where many had the Tories pegged to come second behind Labour. Cameron’s Tories went on to win an outright majority.


·         And to his credit, the Tories were able to expand their MPs on re-election – a rare political feat.


·         But Cameron will not be remembered for any of this. It is the decision to hold a referendum he never needed and that he lost over Brexit that will define his legacy in history books for years to come.


·         Fearing that UKIP might cost the Tories the election, he promised an EU referendum if the Tories formed a government. And – to his shock – he got his wish.


·         Then fearing summer stories about migration that also never materialised, a referendum bill was rushed through Parliament and the public had the spring to decide.


·         When Cameron took over the Tories, they were divided over Europe. Now the country is too.

CONTACT DETAILS ARE HERE.
Posted by Thom Brooks at 8:43 am No comments:

STATEMENT: Theresa May & the UK points based immigration

The news today is that Theresa May has rejected calls for a points based system for Britain post-Brexit. But this is only partly true.

For nearly a decade, the UK has had a points based system - but it applies only to non-EU citizens. I know. I had to meet the right number of points to stay in the UK as a non-EU citizen from the United States.

Australia is credited with having a points based system that the UK should import - and this is what Tony Blair's government largely did. Australia brought in the system to attract more immigrants.

The way it works is that someone can get a visa to live and work in Australia if they satisfy a number of requirements: each gains an applicant a set number of points, these are added up and a visa is granted if the number meets or exceeds a target.

Britain brought in a similar system - based on the Australian model - but added caveats like a limit on the number of work visas that could be granted.

We're told she prefers work visas. If there are only x number of work visas to award, then these can be limited to x - but it is unclear why there cannot be a cap on work visas alongside using a points based system like at present for non-EU citizens.

And passing the points based system hasn't been a problem for her before. After I passed the system, I applied two years later for British citizenship - and then Home Secretary Theresa May sent me this letter: 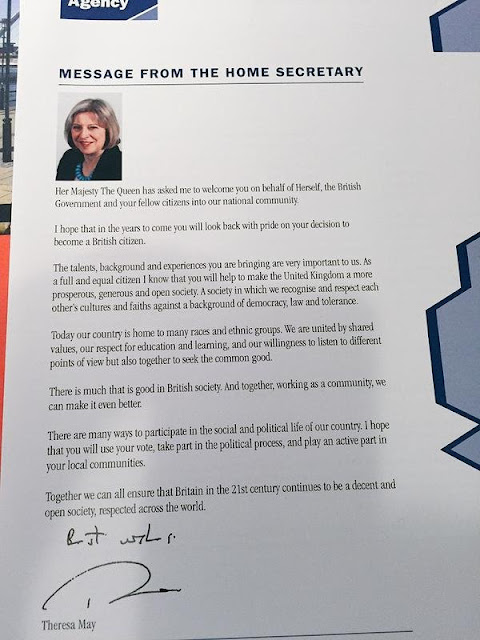 For more on how a points based immigration system works, see my book Becoming British: UK Citizenship Examined (Biteback) published this summer.
Posted by Thom Brooks at 8:28 am No comments:

Thom Brooks TEDx Talk: Should the British Citizenship Test be a Barrier or a Bridge?

Delivered at Durham University
Posted by Thom Brooks at 1:15 am No comments:

Me on RT
Posted by Thom Brooks at 1:13 am No comments: