Off to the House of Lords 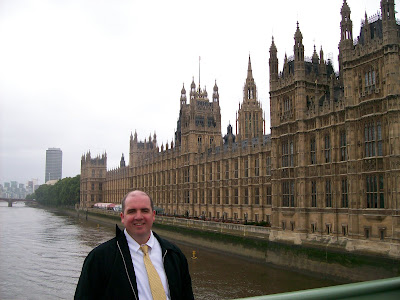 I will be offline for the next two days, as I will be travelling shortly to London.

I will be attending a lunch in the House of Lords hosted by Lord (Bhikhu) Parekh and the Academy of Social Sciences, along with several fellow members of the Political Studies Association's Executive Board. After lunch, Baroness Onora O'Neill will give a speech entitled 'Normative Inquire and Social Science'.

Needless to say, I am thrilled at this opportunity, but I will be unable to post new items for the next couple days.

Meanwhile, I urge readers to check updates over at Ethics Etc and Public Reason, as well as contribute to an outstanding post on APA hiring practices at Brian Leiter's "Leiter Reports" blog.
Posted by Thom Brooks at 11:03 am No comments: 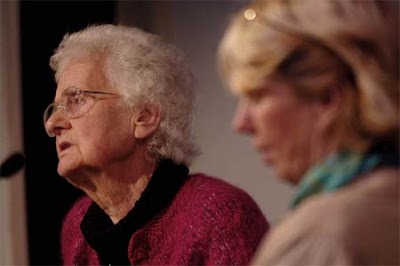 Philosophy has had a curious history at the University of Newcastle.

The University was once known as "King's College" and a part of the University of Durham. A variety of philosophers of reputation taught at what was then called King's College, Durham, including the famous Hegel scholar John Niemeyer (J. N.) Findlay (although this site fails to note this).

King's College, Durham became the University of Newcastle in 1963. Over the next two decades, Newcastle's philosophy department was home to Michael Bavidge, William Charlton, Jane Heal, and Mary Midgley (pictured above), amongst many others including Louis Arnaud Reid.

In time, the university chose to close the philosophy department about 25 years ago. Ever since, several members of the former department meet regularly for meetings at Midgley's home as "APIS": Applied Philosophy---Ideas Section.

(By way of brief background, philosophy has re-emerged at Newcastle, both through the efforts of Classics ---led by Philip van der Eijk--- and a new Philosophical Studies programme begun by Milan Jaros, in Physics. The latter has been interested in technology and philosophy (given its location as part of Physics in the Faculty of Chemical Engineering(!)), although it has since branched out into aesthetics, epistemology, and ethics all with a very solidly postmodern slant. Perhaps the largest group of philosophers at Newcastle today are found in the new Newcastle Ethics, Legal, and Political Philosophy Group that Peter Jones and I started in 2004. We now have fifty members, composed primarily of academic staff ---from Politics, Law, Classics, and elsewhere--- and graduate students. Philosophy continues to be alive and well at Newcastle despite the closure of its Philosophy Department, and what remains is perhaps one of the largest organized groups of political and legal philosophers at one campus.)

"APIS" is perhaps best characterized as a philosophy department in exile. And what a group they are. Last evening, I presented my paper to them (arguing against expressivist and communicative theories of punishment, championed by Joel Feinberg and Antony Duff). There were about a dozen in the audience, with 88 year old Midgley ensuring tea and chocolate biscuits were readily accessible to all.

The comments and questions period after presenting my paper was simply second to none. In fact, there was something very special about being a part of a community of philosophers interested primarily in seeing only where arguments might lead us and challenging widespread views and no more. If only more departments were more like this...
Posted by Thom Brooks at 10:11 am No comments:

The changing Zeitgeist in British politics 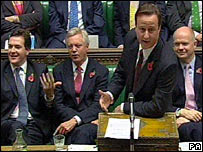 Watch this clip of David Cameron reacting to Prime Minister Gordon Brown's legislative proposals for the coming year. It is certainly not everyday that you see the Prime Minister shake when responding to questions (which he did afterwards). The legacy of New Labour may be coming to an end. (Further details here.)
Posted by Thom Brooks at 12:09 pm No comments: 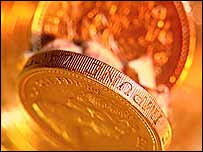