Leif Wenar on "Property Rights and the Resource Curse"

. . . is in the current issue of Philosophy & Public Affairs and found here (subscription required). It is easily one of the most interesting articles I have read in a very long time.
Posted by Thom Brooks at 6:22 pm No comments:

My review of Martha C. Nussbaum's Liberty of Conscience: In Defense of America's Tradition of Religious Equality (Basic Books, 2008) has just appeared in the current issue of the Times Higher Education. It can be read in full here. An excerpt:

"In Liberty of Conscience, Martha C. Nussbaum argues that threats to religious liberty are not unique to the US, but that its response to these threats since its colonial days is unique and presents us with a model worth adopting elsewhere.

The US lacks an established state religion and, instead, has adopted a separation between state and religion, whereby the state shall not favour any religion over others. The Government must treat all religious views (including atheism) on equal terms with equal respect. Citizens then possess not only the liberty of their conscience to accept a particular religion without fear of state oppression, but they also have a liberty to express their conscience in their dress, worship and other ways within certain boundaries without fear of state oppression in these matters as well.

Thus, the separation of state and religion is, in fact, "a way of respecting human beings" and does not harm liberty of conscience and its expression. Only threats to public peace and safety - where the state has a clear interest in protecting its citizens - can legitimately limit the free exercise of our religious beliefs. Otherwise, we should accommodate religious differences [. . .]

[. . .] Liberty of Conscience is wide ranging and covers an extraordinary amount of ground. It covers the wrongful attempts at suppressing the religious worship of any number of groups, including the Amish, Jehovah's Witnesses, Mormons, Native Americans, Roman Catholics and Seventh Day Adventists.

In addition, Nussbaum addresses a great variety of contemporary issues pertaining to the freedom of religious expression, such as evolution, the pledge of allegiance, public displays, religious dress, same-sex marriage and school prayer [. . .]

[. . .] Nussbaum's Liberty of Conscience is a true tour de force on issues of pressing contemporary concern internationally, reaffirming her place as one of the most significant and thought-provoking public intellectuals today. Her book is a treasure trove of riches in both religious scholarship and philosophical argument that cannot be overlooked by anyone with an interest in the topic."

UPDATE: A review of Liberty of Conscience was also recently published by the New York Times. It can be found here.
Posted by Thom Brooks at 12:45 pm No comments:

Book of the month: Bhikhu Parekh's "A New Politics of Identity" 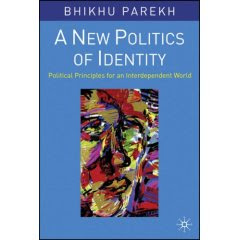 I have just received a copy of Bhikhu Parekh's A New Politics of Identity: Political Principles for an Interdependent World published by Palgrave Macmillan. (It can be ordered in USA or UK.) A brief blurb:

"A systematic discussion of the ethics and politics of human solidarity needed in a globalized age.This book provides a broad-ranging analysis of a key issue in political philosophy and political practice. It is an important and timely new book from leading political theorist and author of Rethinking Multiculturalism, Bhikhu Parekh. It examines the roots of terrorism and shows why the 'war on terror' is misguided. The New Politics of Identity pursues many of the central issues raised in the author's Rethinking Multiculturalism focusing in particular on their consequences for global politics. Parekh develops a theory of identity that combines respect for diversity and applies this theory to a range of key current debates on national identity."

I have no doubt that this will prove to be one of the most significant books of the year, by one of today's most distinguished political theorists. Very highly recommended!

Posted by Thom Brooks at 4:57 pm No comments: