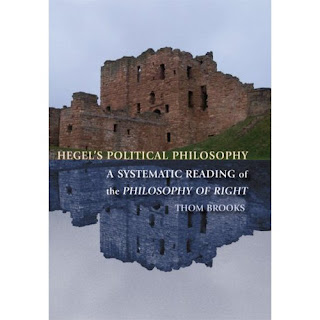 Needless to say, I would be very interested to hear what readers think of the book if you have any comments.
Posted by Thom Brooks at 6:24 pm No comments:

It is that time of year again for the Queen's honours list. This year's list is little different from past lists, with no one receiving awards for services in academic law, philosophy or politics. There is some good news, however, for those of us in Newcastle as the former Vice Chancellor of the University of Newcastle, Christopher Richard Watkin Edwards, has been knighted (more details here).
Posted by Thom Brooks at 2:11 pm No comments:

First, we have learned that the security forces have not requested 42 days. If 42 days is necessary to protect the country from any terrorist threat, then it is curious that MI5 has not felt this threat --- a threat they monitor --- requires a change in the law. It then appears implausible to believe a change in the law is necessary to help bolster the country's security when those who hold the expertise in the area clearly deny this.

Secondly, the former Attorney General, Lord Goldsmith, opposes the bill. When the guy who thought the Iraq war might be justified does not think this bill can be justified, it may be another reason to be suspicious.

Thirdly, we know that the Crown Prosecution Service (CPS) has also not requested a change. This is especially curious, as it is they that would be responsible for prosecuting all cases. If they do not believe that they need 42 days, then why does the Government think differently . . . ?

My own suspicions is that Brown is overly desperate to get some good news. Detaining without charge terrorist suspects for 42 days is unnecessary and there is no evidence to suggest it will become necessary: in fact, the Home Secretary claims we should pass the bill now precisely because it is not necessary (as it might possibly become necessary at some undisclosed time in the future). However, many people do not feel too strongly about supporting terrorist suspects these days and Brown may be able to claim he is "tougher" on terrorism than his critics, however false his justifications for his position. What is more, given how poorly his tenure has gone thus far, many Labour MP's may well be pressured in supporting this ill-thought legislation simply to show their support for him in the wave of constant bad press. (Of course, voting for a bad bill because you feel sorry for the fellow who proposed it is a very poor reason to vote for it.)

Finally, I highly recommend that readers read meditations71 and its terrific post on this topic, not least its reminding us that perhaps the true reason for "42" days is that "42" is the answer to the question of "what is the meaning of life?" (in Douglas Adams's The Hitchhiker's Guide to the Galaxy).

UPDATE 3: Conservative MP David Davis has left his seat, forcing a by-election that will be centred on this bill. Or so Davis hopes . . .
Posted by Thom Brooks at 11:15 am No comments: