Why go to university?

Some reasons include becoming more lucky in love and having more close friends. The curious details are here.
Posted by Thom Brooks at 12:03 pm No comments:

What would happen if there was a zombie attack?

Medicare and the US "debate" over health care

Secondly, would government-provided health care provision involve "death panels"? No. One reason is that there already is government-provided health care provision -- specifically, for those over 65 years of age -- and there are no "death panels" to be found. A second reason is, well, there are no plans for "death panels" at all. In fact, the claims that "death panels" will be part of the plans arise only from out-of-context hack jobs from the past publications of persons associated with advising Congress on how best to pursue reform. No proposal makes provision for "death panels." I think the best challenge here to those who say it does is this: "so on which page do proposals endorse death panels, panels that will act as you claim they will do?" There are no page numbers to cite because it doesn't appear.

I wonder what opponents might say in reply. I suspect that --- given how strongly they argue against the government running any health care provision --- they simply must oppose Medicare. Furthermore, they may be right to keep a close eye on the details, but it is disengenuous to oppose plans because of a provision (e.g., "death panels") that nowhere appear in the plans.

UPDATE 1: Those who think that criticism of the proponents of health care reform is some crazed "leftwing elitist" plot would do well to reflect on David Cameron's statement today that the NHS is his "number one priority" (here). When the party of Thatcher continues to support the NHS so strongly, rightwing opponents of health care reform should consider just how far to the right they genuinely are.

UPDATE 2: An interesting story here on US health care.
Posted by Thom Brooks at 1:14 pm No comments:

Justified violence and the expression of moral arguments

In her highly interesting How Terrorism is Wrong (which I've commented on previously here), Virginia Held states:

"If, however, an existing political system refuses to allow the expression of moral arguments designed to transform it and if an act of political violence can constitute such an expression, it may be morally justifiable" (Oxford University Press, 2008, p. 138).

Held is clearly not stating that all acts of political violence are morally justifiable (a) if they could constitute an expression of a certain kind that is (b) denied by a political system. However, there seem to be at least two important (and missing) qualifications.

The first is that the persons desiring hitherto denied expression of certain moral arguments should be members (whether as citizens or residents) of the political system in question. This is not to say that non-members from other political systems are unable to pass justified comment on rival systems, but I don't think system x has any right to violence against system y on the sole grounds that the latter system doesn't want to hear what the other system wants to say. It seems to me that other conditions must hold, such as the fact that system y is harming its people, for example.

More importantly, are there some forms of expression that should be prohibited? If so, then it strikes me that the view above is problematic. Am I alone?
Posted by Thom Brooks at 1:10 pm No comments:

There has been much discussion about the conduct of journals on various blogs, including Brian Leiter's blog and my own. We have published online and elsewhere some data on the Journal of Moral Philosophy, data I'm proud of. I have since promised to ensure more is available.

Submissions were received from the following countries:

Our review times have been excellent:


I believe these numbers are strong -- and my thanks goes to the members of our advisory board, editorial board, and referees for their swift return of reports. If anyone has any further questions about the JMP, then please contact me directly here.
Posted by Thom Brooks at 3:21 pm No comments:

Some fun from Auto-Tune

. . . is here. I nervously await the results with a few concerns:

(1) First, I wonder how precise the numbers will be. For example, I've submitted many papers to many journals. I've had better experiences with some journals than others. However, I'd be hard pressed to remember precisely how many weeks/months any paper was with any journal. Either way, the information will be incomplete: only editors will know precisely the average review times, etc. The JMP publishes its results in its issues.

(2) A second related concern is the sample: I'm simply guessing that those with negative experiences will be more likely to take part than those with positive experiences. For this reason, I hope colleagues do take the survey to provide a more representative sample.

(3) A third concern is editing itself. This is yet another reason why I encourage colleagues to attend the APA-Eastern this year in New York where there will be a panel hosted by the relaunched Association of Philosophy Journal Editors. There will be a wide ranging debate taking place on 28th December.
Posted by Thom Brooks at 11:27 am No comments:

US-style primaries in the UK?

David Milliband seems to think it's a good idea (see here). I suspect he'd right.
Posted by Thom Brooks at 12:09 pm No comments:

. . . which you can watch here. The unidentified object speeds past over Newcastle's Quayside: at least it knew where in town had the best views!
Posted by Thom Brooks at 12:36 pm No comments: 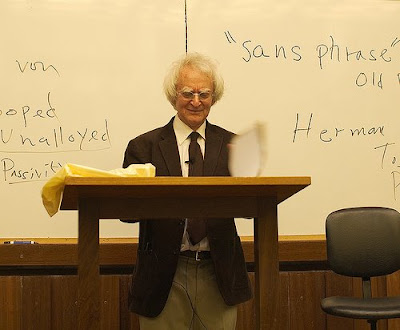 I am very sorry to announce the death of G. A. Cohen, who died about 5am this morning. Of course, Jerry Cohen was the Chichele Professor of Social and Political Theory at All Souls College, Oxford and one of the leading political philosophers today. I will post obituaries as soon as they appear.

I first met Jerry while a graduate student in philosophy at University College Dublin. He had come to UCD to give a lecture and for a seminar on his work the following day. I was immediately struck by what a wonderful person he was: while we had never met before, we spoke at length about Hegel's political philosophy -- the topic of my proposed doctoral research -- and we remained in contact ever since. I would send offprints on anything about Hegel I published and always received a warm response. While his criticisms could be very sharp(!), I was highly impressed at how generous he was with his time and advice for so many. He will be sorely missed.

UPDATE: Wonderful tributes are begin to appear, such as those by Chris Bertram and Colin Farrelly.

UPDATE 2: Cohen's funeral will take place at All Souls College, Oxford at 4pm on 11th August in the chapel. I understand that the event is open to all. A memorial service will be held later in the year.

UPDATE 3: See this from Jo Wolff.

UPDATE 4: See this from The Guardian.

UPDATE 6: See this from The Times.

6% of all US scientists are Republicans

Interesting details here, from the Leiter Reports.
Posted by Thom Brooks at 1:20 pm No comments: