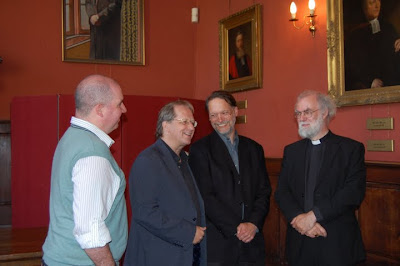 2009 has proved a special year for our annual conference (on the theme of 'Hegel and Kierkegaard'). Our group of 40+ delegates included His Grace, Dr Rowan Williams. Williams is the Archbishop of Canterbury and head of the world-wide Anglican Church, as well as a remarkable figure more generally. He is the first from Wales to hold this post.

Members of the HSGB Council were able to have lunch with him prior to the conference and he engaged -- with some genuinely excellent questions -- in several discussions. Hopefully, he'll be back at next year's conference (on the theme 'Hegel and Kant' and co-organized with the UK Kant Society) . . .
Posted by Thom Brooks at 3:27 pm