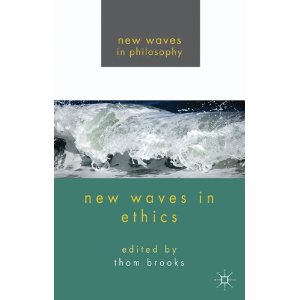 I am delighted to report that New Waves in Ethics is now published! It may be found on Amazon dot com and Amazon dot co dot uk (and elsewhere). The blurb:

"New Waves in Ethics brings together the leading future figures in ethics broadly construed, with essays ranging from meta-ethics and normative ethics to applied ethics and political philosophy. Topics include new work on experimental philosophy, feminism, and global justice, incorporating perspectives informed from historical and contemporary approaches alike. An ideal collection for anyone interested in the most important debates in ethics and political philosophy, as well as those with an interest in the latest significant controbutions from the leading new generation of philosophers working in ethics."

Thom Brooks - "What Did the British Idealists Ever Do for Us?"

Danielle Bromwich - "How Not to Argue for Motivational Internalism"

Christian Miller - "Guilt, Embarrassment, and the Existence of Character Traits"

Lisa Fuller - "Knowing Their Own Good: Preferences and Liberty in Global Ethics"