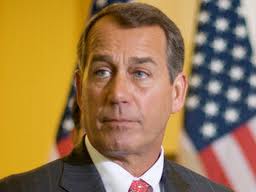 John Boehner is a Republican and Speaker of the US House of Representatives. When asked about President Barack Obama's plans to raise more tax only from those who are millionaires, Boehner is reported to have replied "[p]itting one group of Americans against another is not leadership".*

I agree. So it's a good thing that President Obama isn't doing this. When you have Warren Buffett reminding us it is only fair that the most wealthy pay their fair share (see here), then the case seems clear. After all, Buffett is hardly a commie pinko. If others understand capitalism better, then let us see if they can match his financial wizardry and oracle status.

They say we're all in it together. Well, it's about time.

Labels: economics and finance, US politics