Should the UK raise its speed limit? 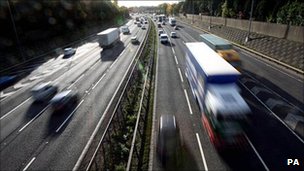 Philip Hammond, the Conservative Party MP and Transport Secretary, is to launch a move to raise the speed limit on British motorways (translation: highways) from a maximum of 70 miles per hour to 80 mph. This move is supported by three main facts (details here):

First, many drivers flout the current speed limit. One estimate claims 49% of motorists drive faster than 70 mph on British motorways.

Secondly, new technologies have helped save lives. There has been a drop of 75% in the numbers killed on British roads so a faster limit need not lead to more deaths.

Thirdly, Hammond believes that our roads "should be the arteries of a healthy economy".

Let's rebut each in turn:

1. If many drivers are breaking the law, then perhaps the law should be more strictly enforced. Combine this with the third claim above: if the worry is that we must boost the economy, then it seems there is a ready income stream: more speeding fines. Moreover, if so many motorists are driving above speed limits, then another possible consequence might be raising all speed limits. So why only motorways? Or is there something different (and unmentioned) about them?

2. While I have not seen the figures, it is difficult to accept that fewer people die on the roads now than in 1965 given that far more use the roads today. I suspect the idea is that fewer may die as a proportion of the population. If this is meant, then a big contributing factor has been the Labour government's investment in buses and trains. Fewer people (as a proportion of the population) are dying on our roads because fewer people (as a proportion) are in cars. So perhaps the answer is not faster limits for cars, but more special lanes for buses and more high speed rail. Nevertheless, the fact that fewer might die today than 50 years ago is not an argument for redressing the balance in favour of permitting faster driving that will contribute to higher death rates.

3. Perhaps sound road policy will boost the economy. The problem is that any review will cost us money now -- money that might be spent improving roads, not considering whether we should drive faster on them -- and any change in speed limits will not come into effect for another two years (in 2013). Thus, this is a plan to help the economy long after any recovery might have taken place at the cost of more road deaths. Oh, and more greenhouse gas emissions.

So why argue for a policy that is damaged goods? The reason is simple. While such reviews will cost money upfront (that I believe will be poorly spent), it is an effort to drive (pardon the pun) transport policy on the cheap. No bold vision. No new roads. No new rail transport. No new airport. Not even new signs! (Translation: in the UK, motorways have a symbol meaning "national speed limit applies" rather than a number. You must love common law in theory and in practice . . . )

Yet another ill-thought plan by a government that should know much better. Disappointing. Again.
Posted by Thom Brooks at 1:25 pm

I have no idea what an appopriate speed limit is in British driving conditions. But I do think that rampant limit-breaking can be a sign that the limit is too low (and it can be safer to have a higher de jure limit so that everyone will drive closer to the same speed); that a low speed limit that turns people into lawbreakers and treats their fines as a revenue source is bad in legal-cultural terms; and that in your first rebuttal you illegitimately switch from "economy" to "public fisc."

Thanks for your comment. I'm very wary of Wikipedia statistics, but they don't seem far off the gov't's statistics (here: http://www.dft.gov.uk/statistics?tag=gender-tag%2C+age). But even if the fall was greater, is it a good policy to knowingly and foreseeably increase the number of deaths from traffic offences so that people can shave a few minutes off journey times? Perhaps I'm less easily persuaded.

The fact that many break the law may mean the law is a bad one that should be changed - or it may mean that it is a good law that should be better enforced. It isn't clear to me why better enforcement is not an option esp where the government is desperate for new revenue streams. Perhaps relaxation of the limit is best, but the supporting arguments are not convincing -- especially when it is clear it will lead to more death and injuries than we have at present (which I suspect are already far too much - even if much less 50 years ago). I don't buy the claim on "legal-cultural"(?) terms. Perhaps what is meant is that people clearly do not consent to a law they wilfully break, but there are often clear limits on consent, such as the harm principle. If greater liberty to drive faster will lead to greater deaths and injuries, then it isn't clear that the law should be changed.

Sorry for the shorthand. A widely-broken law is bad for the culture of legality in a society in two ways: one, it teaches disregard for the law, and two, it grants increasingly-arbitrary power to enforcement officials. In American terms (what I know best), if everyone is speeding and speeding counts as an offense for which you may be pulled over, fined, and searched, then it's all too easy to use speeding as a cover for whatever arbitrary rule (whether "search black drivers in expensive cars" or "fine out-of-state drivers who don't have a vote around here") is useful for the powers that be. That's what I meant by "legal-cultural"-- a culture of disobeying the law from below, a culture of arbitrary enforcement from above.

One could always say "well then we should have strict universal enforcement!"-- but you'd probably agree that there is *some* speed sufficiently low that this is politically unsustainable. As I said, I have no idea where Britain is on this scale. But the nationwide 55 mph in the US was of this character.

I do think that it's a terrible idea to plan on fines for offenses as a revenue source; it creates awful incentives for public officials, and creates all the problems I mentioned in my first paragraph. Ex ante taxes, tolls, and fees are surely preferable to creating an incentive for the inducement of criminal behavior. Note that the revenue-maximizing strategy would not be "enforce the speed limit so strictly as to end speeding" but rather to enforce it spottily enough that most people most of the time think they can get away with it.

I'm unsure I like the language which sounds too close to natural law for my tastes, but I see the potential worry. Nevertheless, the worry hasn't materialized: the call for change is not because the police might be abusing powers. If anything, the worry may be there are not using their enforcement powers enough.

In the US, the 55 mph limit was initiated due to the early 1970s oil crisis. Driving 55 meant using less gas than at 65. The change was not due to safety concerns. As oil hit record lows two decades later, the need for the US to use less oil seemed less pressing (or at least to those who make these decisions) and the limit raised to 65. I don't believe it was a problem of enforcement, but rather that the original problem had appeared to disappear.

I agree: policies should never be designed to raise cash in this way. The surprising thing is the current UK government has lowered itself to such crude measurements in other areas - so why not here? While some motorists may be happy from this change, will they vote Tory if the economy tanks (further)? I doubt it.

The one certainty is that implementation of this new scheme will ensure the UK fails to meet its legally binding targets on climate change. So people better enjoy driving faster because they'll have to cough up cash in terms of fines for failing to meet emissions targets (resulting from being able to drive at higher speeds).

I must say that the argument that since the number of deaths has fallen we might as raise the number a bit is a curious one.

As far as I'm concerned, the points about increased fuel consumption and greater emissions ensure that I wouldn't support an increase in the speed limit.

Glad to see we agree!