Tony Blair on the War on Terror 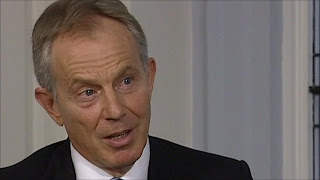 Unsurprisingly, the former Prime Minister denied that military action had radicalised anyone nor does he think the world is less safe. Details here.
The BBC reports:

So he denies responsibility. Others become radicalised because of false beliefs about what their religion "compels" them to accept and not because of invading Iraq, etc. What then is the alternative causal explanation for increasing security threats? People feel compelled out of the blue?

The more time has passed since the invasion of Iraq the more we have seen the true poverty of the support for this shameful war. I suspect things will only become worse the more we learn about the decision to go to war and the planning behind operations.
Posted by Thom Brooks at 5:18 pm