US Debt: Which President Did Best? 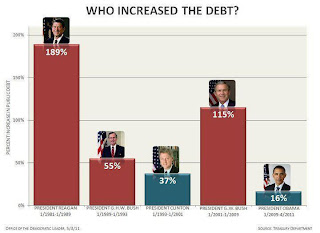 Labels: economics and finance, US politics

The chart is nonsense, as pointed out here: http://www.washingtonpost.com/blogs/fact-checker/post/a-bogus-chart-on-obama-and-the-debt-gets-a-new-lease-on-life/2011/09/28/gIQAx40Y6K_blog.html

Of course, there's a perfectly good reason why the debt has gone up so much under Obama. Still, we might as well stick to facts rather than error-ridden propaganda from a politician's office.

The link you cite notes that there are different ways of calculating debt - and that other measures have greater merits, but without clarifying why we should prefer alternative ways of counting debt. So I'm unconvinced one side is less partisan than the other...

Isn't it obvious why a debt to GDP ratio is more significant than absolute debt?

But, more importantly, the chart you have up is the old uncorrected version that has Obama's years in office wrong. Correct for that, and the debt for him more than doubles. Even Pelosi's office conceded that error.

I think by pretty much any measure it's going to be Clinton who comes out on top with respect to debt, not Obama.

I don't disagree, but think discussions of debt complex and I readily admit that probably no one graph can do the subject full justice. I also agree that Clinton has surely performed best.

I don't know if this is completely worthless, unless - if you see my earlier comment - my own view is that discussions of debt are complex and should not rely on any single indicator. My posting this graph was meant to be provocative.

So a challenge for readers: what graph(s) should I note instead?