There are several terrific opportunities currently advertised for junior and more senior scholars working in Law, Philosophy, Political Science and/or Public Policy at Durham University. One link to opportunities can be found HERE.

Durham University is a genuinely brilliant place to work full of great colleagues - and opportunities to support research and career progression.

I am appointed in the Law School (where I'm currently serving as the Director of Undergraduate Studies), an Associate Member of the Philosophy Department and supervise two Ph.D. students in our School of Government -- so I have strong ties within and beyond Law.

There is a strong community of colleagues working in ethics, jurisprudence and political philosophy across subjects and a vibrant research culture. For example, the Law School is modest with nearly 50 full-time academic members of staff plus a number of visiting and honorary members supporting 8 research centres and clusters, including Human Rights Centre (HRC), the Centre for Criminal Law and Criminal Justice (CCLJ), the Institute of Commercial and Corporate Law (ICCL), Gender & Law at Durham (GLAD), the Durham European Law Institute (DELI), Law and Global Justice at Durham (LGJ), Islam, Law and Modernity (ILM) and the Centre for Ethics and Law in the Life Sciences (Durham CELLS).

Readers interested in exploring these opportunities are more than welcome to contact me for more information.
Posted by Thom Brooks at 1:19 pm No comments:

. . . is the headline of this piece in today's The Guardian. Perhaps the Government's commissioned cost-benefit analysis would have picked this up if it had looked at figures beyond costs (as any CBA must do).
Posted by Thom Brooks at 10:40 am No comments:

. . . is my latest piece for The Conversation and it can be found here. A brief excerpt:

"A new report into so-called “health tourism” makes for a shocking read. Not because the costs of migrants deemed to have travelled to Britain primarily to enjoy free NHS services on British taxpayers has spiralled to £2 billion, but because it exposes serious concern about the government playing politics with both immigration and the NHS.

Consider the facts. The government has yet to provide a reliable estimate of how many such migrants have actually used the NHS. In July, Health Secretary Jeremy Hunt admitted on the BBC Today programme that “the truth is we don’t know the number” of health tourists in Britain.

This failure to know the number of migrants benefiting from the NHS without contributing to its costs hasn’t prevented Hunt from claiming that health tourism costs the UK about £12m - a figure manufactured from the rounded up sum of £11.5m, which related to unpaid charges for treating migrants. When we talk about the costs of health tourism, what we’re actually talking about is any use of the NHS by migrants for any reason. And so we begin to expose the mythical health tourist problem.

The new report, published by the Department of Health, makes for interesting reading. Its purpose is clear: to provide a more reliable evidence-base for estimating the number of migrants using the NHS and associated costs . .  [READ FURTHER]"

Posted by Thom Brooks at 8:49 am No comments:

It was a pleasure to speak in this year's Durham Book Festival and sponsored by Durham University's Institute for Advanced Study.

I was involved in a small panel of academic authors. It was wonderful to speak about my book Punishment and how it came together.

Our focus was discussing the topic of academic authors writing for a more general audience. My view remains that the best way to go about writing to a more general audience is to begin speaking with one. One obvious starting point is undergraduate lectures: much of the material for my books and articles begins in undergraduate lectures or graduate seminar discussions.

A second avenue is engaging with audiences away from university buildings. I've had the honour - and delight - of speaking to various political events where I always learn something important about politics, legal reform and how ideas might be shaped even better to reach a more diverse audience beyond academia.

The third avenue is online blogs, Twitter and the like - but I think this is best approached after one's "message" has been honed through the previous two avenues.

But no matter which path(s) we might take, it is clear - or at least clear to me - there is much more we academics can and should do.
Posted by Thom Brooks at 1:43 pm 2 comments: 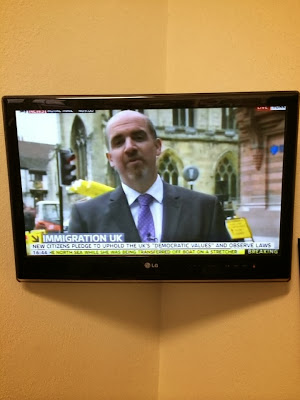 Great to have the opportunity to be interviewed live by Sky News on immigration and the Life in the UK  citizenship test - highlighting why it is a problem and what we can do to fix it. (For more, see my report.)
Posted by Thom Brooks at 9:34 am No comments:

Many thanks to the University of York

. . . for hosting my talk "The Capabilities Approach and Political Liberalism" yesterday. Excellent questions and wonderful hosts.
Posted by Thom Brooks at 9:29 am No comments:

I had the pleasure of attending a major Labour Party event this weekend where Ed Miliband, leader of the Labour Party, was the keynote speaker. I've enjoyed many events over the years, but must admit the atmosphere the best yet. Met some highly talented new candidates contesting seats in the 2015 election -- and had an early birthday treat in a nice chat with Ed Miliband about coming to the UK, immigration and, yes, the Life in the UK test.
Posted by Thom Brooks at 4:49 pm No comments:

Victims should have more power over sentencing decisions