. . . for hosting my talk this evening on US public policy and the death penalty. Delighted by great questions and kind invitation.
Posted by Thom Brooks at 11:03 pm No comments:

Delighted to find Punishment (Routledge, 2012) #1 seller for "Philosophy of Law," #7 for "Capital Punishment" and #14 more generally in "Philosophy": 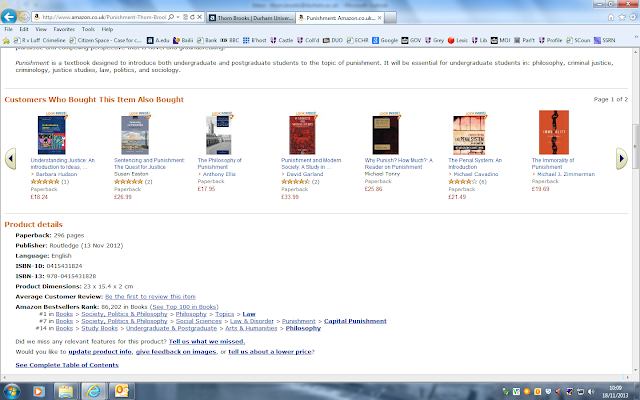 Amazon.co.uk site HERE (which is where image is from)

Amazon.com site HERE
Posted by Thom Brooks at 10:14 am 2 comments:

. . . is the heading of this special Public Lecture at Newcastle University (part of its Insights series) that I'll be speaking at with my long-time friend and fellow North East philosopher Mary Midgley. The details:

An event celebrating ten of the greatest minds of the 20th century - presented by Routledge Free admission, no pre-booking required.


Where are the great minds of today? Are we witnessing the end of ‘grand theory’ in the human sciences? Join acclaimed philosopher Mary Midgley, author of Beast and Man, and The Myths We Live By, and Thom Brooks, author of Hegel’s Political Philosophy and the founder of the new Unified Theory of Punishment, for an enthralling discussion about what, if anything, great thinkers such as Bertrand Russell, Claude Levi-Strauss, Sigmund Freud, Iris Murdoch and Simone Weil have in common. This event celebrates Routledge’s new Great Minds series – ten of the great books of the twentieth century refreshed for a new audience.

Tories forget how the internet work, deletegate reminds them

. . . is my latest piece for The Conversation and can be found here. The piece discusses the sudden deletion of press releases and speeches by the party leadership in the run up to the last General Election (which found the Tories in a compromising coalition with the Liberal Democrats and so unable to make good on many campaign pledges now conveniently removed from view) not just from their website, but also appear to have tried to remove them more widely beyond their website. READ MORE
Posted by Thom Brooks at 2:18 pm No comments:

Yet another jaw dropping response from the Government to a brilliant question posted by Lord Roberts of Llandudno yesterday in the House of Lords. The exchange (citation: HL Deb, 12 November 2013, c614):

Lord Roberts: "To ask Her Majesty’s Government what assessment they have made of recent analyses of the value of immigration to the United Kingdom economy; and whether they have any plans to revise their target to reduce net migration in response to those analyses."

Earl Attlee: "My Lords, the Government have made no official assessment of the recent analyses of the economic value of immigration to the UK economy. Each policy that influences immigration is assessed using the impact assessment process. The Government have a commitment to reduce net migration to tens of thousands by the end of this Parliament and believe that that will be achieved without an adverse impact on the economy."

Lord Roberts [reply]: "I think I thank the Minister for that Answer, but it is disappointing. It seems that the only real criterion that the Government have in dealing with immigration is in numbers, not in need. Do they have any other policy at all to tackle immigration positively? This morning a news item stated that 20,000 nurses were needed for the NHS. In north Wales I know of three general hospitals where a third of the consultants come from overseas. Is it not short-sighted to deal only in numbers and not look at this in a positive and long-term way?"


So there we have it. The Government lacks an official assessment about the economic value of immigration to the UK economy. Or you might say that it merely lacks an official assessment about only some "recent analyses" of this issue. But it is clear given the strong endorsement - perhaps mirroring praise - for certain analyses that demonstrated high costs (because these analyses failed to account for any benefits -- which is itself a major blunder for any purported "cost-benefit analysis" used in impact assessments as I noted elsewhere) by ministers that some within the Government clearly had a view about the validity of the numbers announced by them on several high visibility media engagements.

And now we now these numbers largely hypothetical, if not only false, and the Government never appeared to have an official assessment of figures all along. Call it the Politics of Beguilement.

All the Government can do is try to throw around more contested figures about net migration without any clear larger framework for how this policy fits into some larger vision. Or how this might simply make sense (which it doesn't).

It's time for the Government's policies on immigration to be called what they are: ill-thought nonsense.
Posted by Thom Brooks at 4:48 pm No comments:

Apologies for the lack of posts recently. I've had a hectic week of lectures and seminars on new topics as well as a wonderful evening workshop at Hatfield College, Durham on sentencing. I also received the Faculty of Social Sciences and Health Annual Award for Outstanding Contribution to Media partly for my work on punishment and restorative justice, but largely because of the media attention and impact of my work examining the Life in the UK citizenship test (with a new, second planned report in draft now). So an amazing week, but more posts on the way including further policy proposals for the 2015 Labour Party manifesto. So watch this space....
Posted by Thom Brooks at 4:45 pm No comments:

On 10th October 2013 and under the heading 'Immigration: UK Citizenship and Nationality', there was a question for debate posed by Lord Roberts of Llandudno (Lib Dem & Vice-Chair of the All-Party Parliamentary Group on Migration):

"To ask Her Majesty’s Government whether they have plans to revise their requirements for those who apply for United Kingdom citizenship or nationality."

An excerpt from the official Parliamentary record (Hansard):

"[. . .] Lord Roberts of Llandudno (LD): My Lords, I appreciate the opportunity to bring up the question of residency and access to the United Kingdom, and to ask the Government to look again at the requirements of those seeking UK citizenship: residency conditions; evidence of their good character; English language ability; and a matter that I have raised in the past, the Life in the UK test. [. . .]

I should like to take the Minister up on an offer he made during Questions in February to meet interested groups in order to devise a more relevant and practical set of questions. As he will know, Dr. Thom Brooks of Durham University makes a number of recommendations for change. First, the handbook should make it clear which sections are to be tested. It contains about 3,000 facts—far too many for anyone to memorise—and the whole matter could easily become a pub quiz. There are inconsistencies and omissions that need to be rectified. The Government should decide what the rationale is for the test. Is it to be a stumbling block or a ladder in the immigration process? It appears totally unfair that it is used as part of the Government’s plan to reduce immigration. That is not what the test is there for. [. . .]

It would be interesting if we set up a parliamentary citizenship quiz—perhaps the Commons versus the Lords—on the Life in the UK handbook. If it succeeded here, we could then roll it out across the UK to see how many long-serving, ordinary UK citizens could answer the questions asked. Perhaps the Minister could set up a ministerial team to tackle these questions. The answers to irrelevant questions should play no part when one is making decisions about a person’s suitability for citizenship. I ask again: where is the necessary information about the NHS, how to report crime, or which subjects are taught to our children? We have to have someone looking at this new set of questions, and perhaps Dr Thom Brooks could do just that. [. . .]

Baroness Smith of Basildon (Lab): My Lords, I congratulate the noble Lord, Lord Roberts, on his persistence with this issue, and welcome his efforts to secure today’s debate. The excellent speeches we have heard do great credit to your Lordships’ House. The noble Lord, Lord Taylor, and I have had a number of debates over the years we have been in our respective positions on the issue of immigration and citizenship, and that reflects the public and political interest in this issue. [. . .]

I am getting close to my time, but perhaps I may direct noble Lords to the report from Dr Thom Brooks of Durham University, which makes it quite clear that the citizenship test is not fit for purpose. The Prime Minister failed it on national television. I am sure that I would fail it, and I regard myself as a very loyal and committed citizen of the UK. It is more like a pub quiz or a game of Trivia Pursuit. [. . .]

The Parliamentary Under-Secretary of State, Home Office (Lord Taylor of Holbeach) (Con): My Lords, I thank my noble friend Lord Roberts of Llandudno for securing this debate [. . .]. The citizenship test has changed. The one introduced by the previous Government has been brought up to date. Although there has been some criticism, notably from Dr. Thom Brooks at Durham, about that test, it has been designed to make it much more real to the people who are sitting the test, and it has been widely welcomed. [. . .] This debate has raised a lot of issues and I have found it very interesting."

The full debate can be found HERE.

Their Lordships -- from across the three main political parties -- make references to my report on the Life in the UK citizenship test - this report can be found and freely downloaded HERE.

. . . can be found here where the guest of honour was Ed Miliband, leader of the Labour Party. Some great photos of a fun-filled event including this gem: 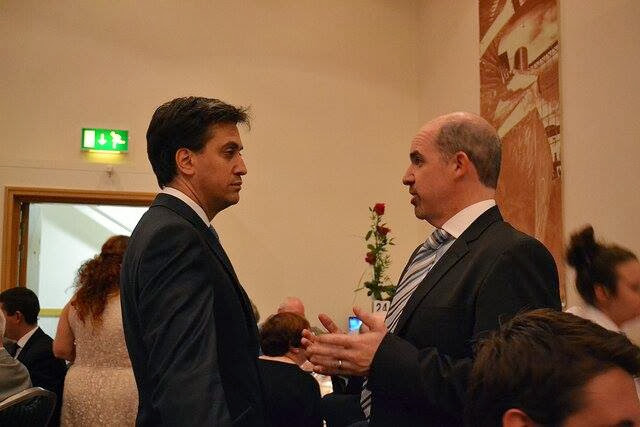 Posted by Thom Brooks at 5:34 pm No comments: