Posted by Thom Brooks at 8:35 am No comments: 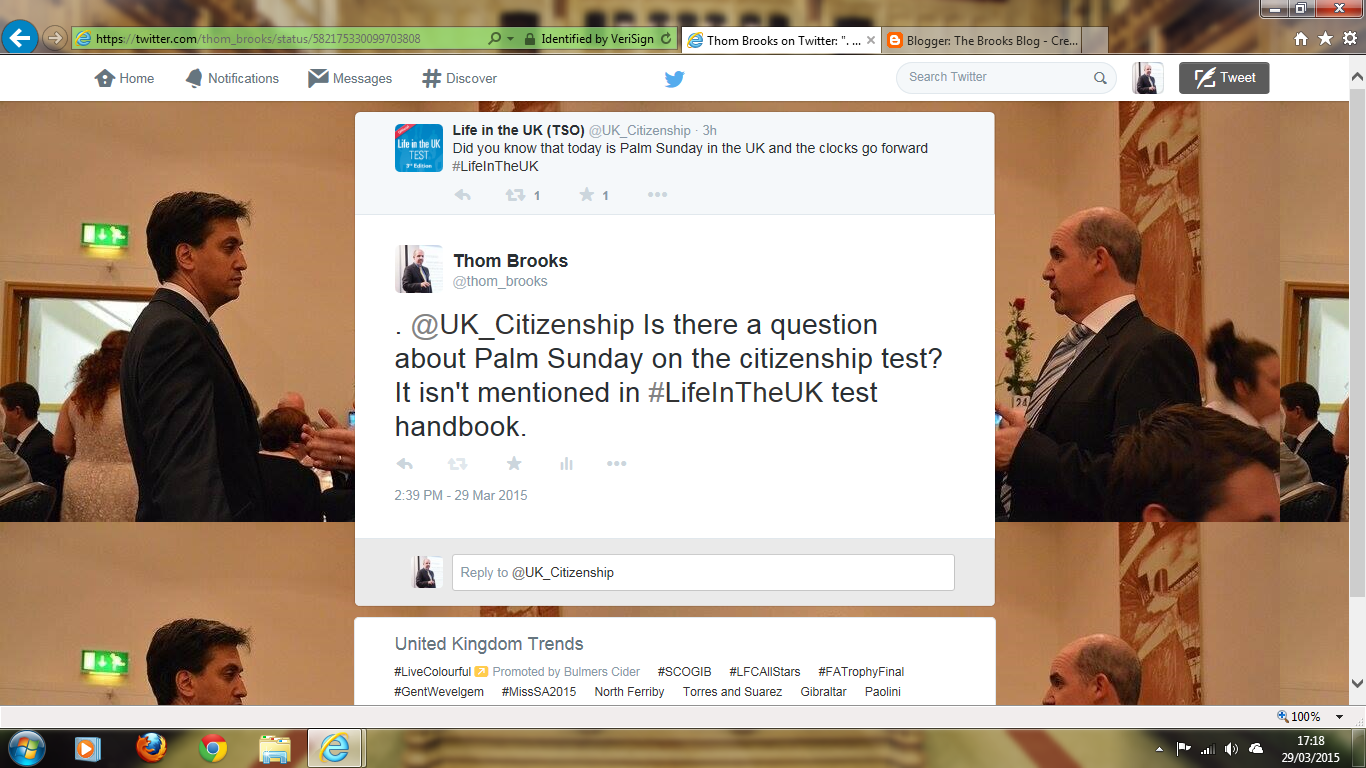 Surprising comment from the official Life in the United Kingdom citizenship test. It's often playful tweets about events and issues in the UK citizenship test took a bad turn today. Readers were asked about Palm Sunday, but Palm Sunday receives no mention in the test handbook - and so not on any test.

Yet another example of my concern that the test requires urgent reforms - and by individuals like myself that know the test (and have sat and passed it). See my comprehensive report on the test and the changes needed HERE.
Posted by Thom Brooks at 5:30 pm No comments:

. . . is the title of my new column for The Journal. READ MORE HERE.
Posted by Thom Brooks at 3:53 pm No comments:

Government should make greater use of university academics as specialist consultants

I'm represented in Westminster by Phil Wilson, a brilliant Member of Parliament and proud to be his friend. Phil is MP for the Sedgefield constituency - and politicos reading this blog will know the previous MP was Tony Blair. Blair's father Leo taught at Durham Law School where I work now. Check out Phil's new website HERE (http://www.phil4sedgefield.uk/).

Expect posts from the campaign train as the general election kicks off next week!
Posted by Thom Brooks at 9:45 am No comments:

. . . is the title of my most recent piece for LabourList, the leading Labour Party blog. I expose serious failing with how the surcharge works - and what we should support instead. READ MORE HERE.
Posted by Thom Brooks at 11:31 pm No comments:

. . . is the headline from Times Higher Education. It highlights the problems I've revealed with the government's migrant 'health surcharge' to launch early next month. READ MORE HERE.
Posted by Thom Brooks at 11:29 pm No comments:

. . . is the headline for a great piece in Friday's The Northern Echo about the serious problems I've exposed in the coalition government's English language requirements for migrants. READ MORE HERE.
Posted by Thom Brooks at 11:27 pm No comments:


Government attempts to tighten English language requirements for migrants are inadequate, according to a Durham University immigration expert. Professor Thom Brooks at Durham Law School argues that the government has failed to ensure new British citizens have satisfactory English skills.


Migrants wanting to apply for permanent residency or citizenship used to be able to pass the controversial ‘Life in the United Kingdom’ citizenship test to prove sufficient knowledge of English. The government stopped this practice and imposed new requirements aimed at raising the level of English proficiency all new migrants must satisfy to live and work permanently in the UK.


Professor Brooks claims the new government policy has too many loopholes that should never have been allowed. He says: ‘The government has made a dog’s dinner of making migrants prove knowledge of English. Expired out-of-date qualifications are accepted as proof under the new rules. Earning a degree from an overseas institution is satisfactorily only requiring the foreign college or university confirms the degree was taught in English – their word is taken at face value. This must change’.


There are currently over a dozen exemptions based on nationality, education, age, physical or mental condition, widows or widowers and highly skilled migrants. Applicants can also be exempt if from one of a list of about 17 listed countries, including Australia, Canada, New Zealand and the United States, but also Belize. Countries like Singapore and South Africa are excluded. The government provides no rationale for why listed countries make the cut: they do not include all countries where English is the official or majority language.


Professor Brooks says: ‘Not every US citizen is a fluent English speaker. Foreign nationality is not a satisfactory test for knowledge of English. The government should close the door on unnecessary loopholes and support a standard English test. This will better improve and maintain standards while providing crucial income for English language services under increasing strain’.


Professor Brooks is known as a leading authority on UK immigration law and policy. He published the only comprehensive report on the UK citizenship test calling it ‘unfit for purpose’ and ‘like a bad pub quiz’ that made headlines worldwide. He is originally from the US and became a British citizen in 2011.


Home Office, ‘Prove your knowledge of English for citizenship and settling’ (29 December 2014) https://www.gov.uk/english-language


Home Office, ‘Knowledge of language and life in the UK for settlement and naturalisation: Statement of intent, changes to the requirement from October 2013’ (October 2013) https://www.gov.uk/government/uploads/system/uploads/attachment_data/file/182545/statement-of-intent-koll.pdf

Posted by Thom Brooks at 4:40 pm No comments:

FOR IMMEDIATE RELEASE
New migrant ‘health surcharge’ an election stunt full of loopholes
The government announced today that migrants will be subject to a new ‘health surcharge’. The fee comes into effect next month. The surcharge is £200 per year payable upfront with students required to pay £150 annually.
Thom Brooks, Professor of Law and Government at Durham University, argues the health surcharge is an election stunt full of loopholes. The policy begins on 6 April – a week after Parliament is expected to dissolve and during a national election campaign. Brooks says:
“Government rhetoric fails to meet reality. The public are told the surcharge will offset the costs to the NHS from treating migrants. However, thousands of migrants will not need to pay because of several exemptions and restrictions. It’s a clear case of government saying one thing, but doing another.”
The health surcharge will only be imposed on non-EEA citizens in the UK temporarily for more than 6 months. EEA citizens from Europe are unaffected. There are 11 different exemptions from the surcharge include anyone visiting the UK for under six months, intra-company transfers, children under 18 years in care, and nationals of Australia and New Zealand.
Professor Brooks has concerns that the funding raised may not be used effectively: ‘Migrants paying the surcharge must do so upfront and the money collected is distributed to the relevant health department in England, Wales, Scotland or Northern Ireland. The problem is that migrants don’t always stay in the same place. If a migrant moves from England to Wales, the funding raised by the surcharge does not appear to follow the individual. This will mean the new funds might not go to the authorities that need it most’.
‘This health surcharge might not support the NHS in the way it has been announced. The government should stop seeing immigration as a political football and instead as a serious policy area that deserves more serious policymaking’.
ENDS
Further reading
Home Office, ‘Migrant “health surcharge” to raise £200 million a year’ (19 March 2015) https://www.gov.uk/government/news/migrant-health-surcharge-to-raise-200-million-a-year
Home Office, ‘Immigration Surcharge: information for migrants’ (19 March 2015) https://www.gov.uk/government/publications/immigration-health-surcharge-information-for-migrants


MEDIA CONTACT
I can be contacted HERE (thom.brooks @ durham.ac.uk).
Posted by Thom Brooks at 12:06 am No comments:

Looking to contact an expert about the general election?

Then get in touch with us at Durham University? Details here.
Posted by Thom Brooks at 11:03 pm No comments:

Thom Brooks on Migration to the North East

Listen to my interview with BBC Radio Newcastle HERE (from 1.08).
Posted by Thom Brooks at 6:50 pm No comments:

This roundtable explores the relation between political theory and its impact. The first aim is to consider the distinct challenges that the 'impact agenda' in higher education poses for political theorists and how these might be addressed. A second aim is to examine the impact of political theory in a wider sense: What is the value of political theory -- and what would be lost without it? Should political theory be relevant and, if so, how? The roundtable will take a Question Time-like format and expected to consider a diversity of different approaches drawn from academia and public policy to these issues for a wide-ranging discussion about current and future challenges facing political theory. The Political Studies Association-funded event is free and open to the public, but attendance must be registered in advance for security purposes.
Speakers:
Lord Parekh FBA (chair)
Prof Thom Brooks (Law, Durham)
Prof Elizabeth Frazer (Politics, Oxford)
Prof Catriona McKinnon (Politics, Reading)
Dr Emily McTernan (Political Science, UCL)
Dr Martin O'Neill (Politics, York)
Prof Michael Otsuka (Philosophy, LSE)
Prof Albert Weale (Political Science, UCL)
Registration: https://www.eventbrite.com/e/political-theory-and-impact-roundtable-tickets-15992896183?utm_campaign=new_event_email&utm_medium=email&utm_source=eb_email&utm_term=eventname_text
Posted by Thom Brooks at 11:41 am No comments: