Talking about migration to the UK's North East 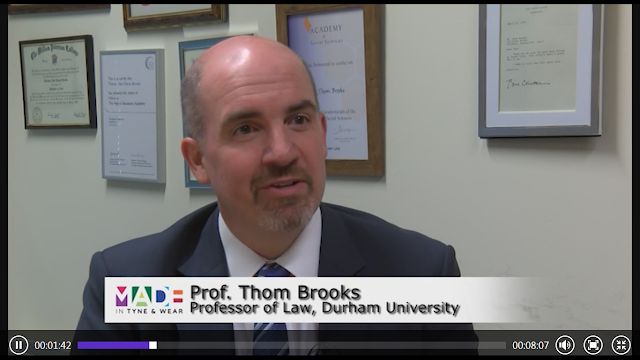 . . . on RT tv, the last of three different interviews I did yesterday LINK HERE). The others were with Sky News and local channel Made in Tyne and Wear.
Posted by Thom Brooks at 11:29 pm No comments:

And the big winner in the Labour leadership contest is...David Cameron

. . . is the title of my latest column for @TheJournalNews READ HERE.
Posted by Thom Brooks at 11:20 pm No comments:

The government is not taking Calais seriously

. . . is my latest piece for Progress Online available HERE.
Posted by Thom Brooks at 11:19 pm No comments:

. . . were the subject of interviews I did today with Sky News (pictured), Made in Tyne & Wear Channel, RT and Express on Sunday. I will post links when I have them. 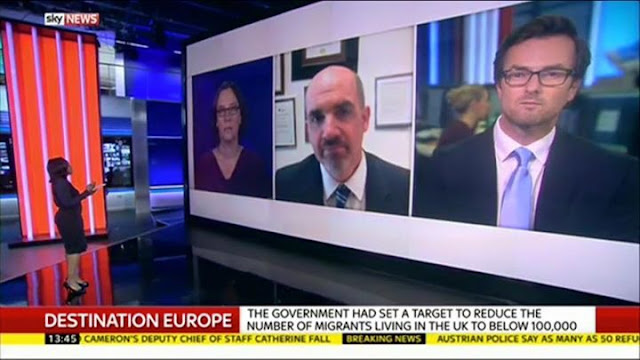 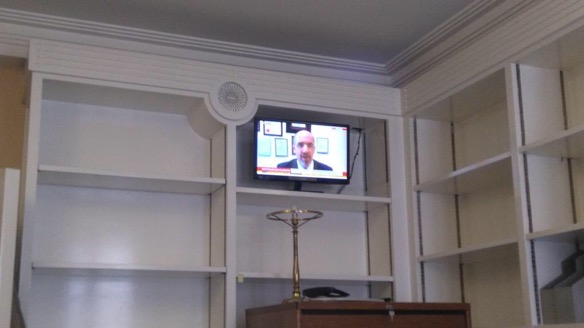 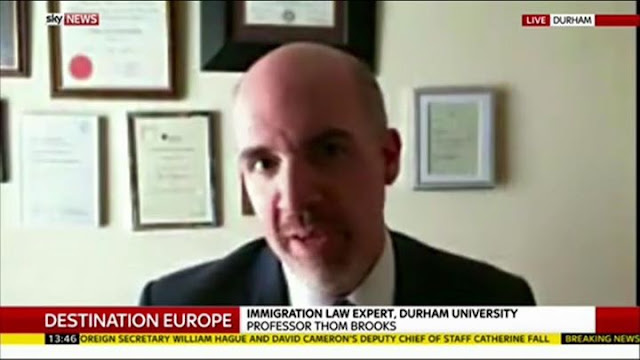 Posted by Thom Brooks at 6:31 pm No comments:

My latest column for LabourList - the top Labour Party blog - is on the leadership race with advice for each of the candidates. The piece "The Corbyn Factor: is Corbynomics Labour's Future?" can be READ HERE.
Posted by Thom Brooks at 11:59 am No comments:

. . . and delivered a fabulous speech to a packed audience at Durham's County Hall with plenty of time for questions. As usual, many in the room had already decided on backing Yvette, but several told me she now took their first preference. The race ain't over yet for Labour's next leader. 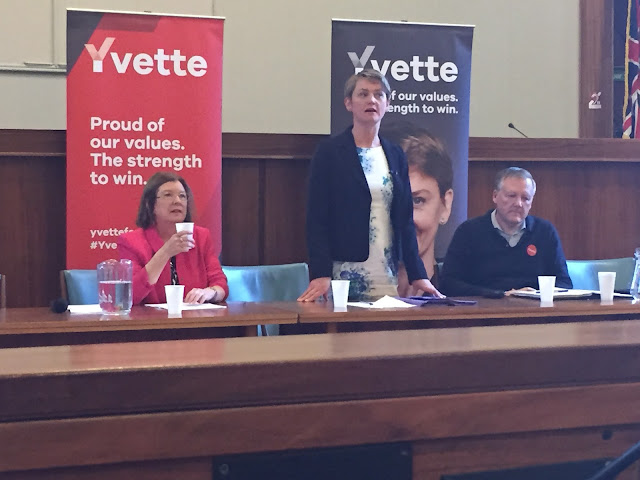 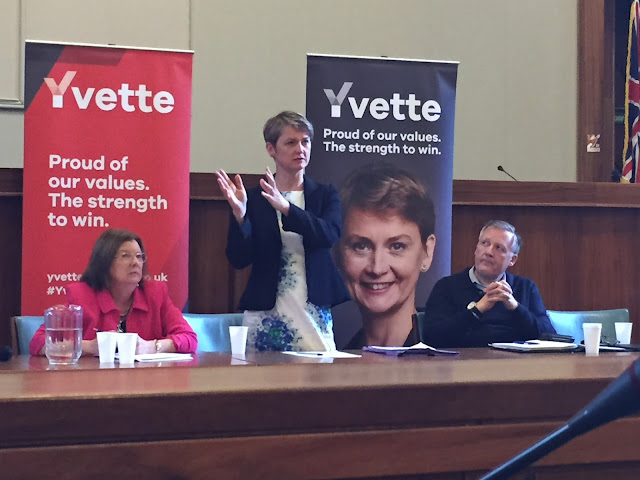 Posted by Thom Brooks at 7:36 pm No comments:

Sorry I'll be unable to share stage tomorrow with Jeremy Corbyn for a terrific event organised in Newcastle by my friend, the tireless David Stockdale. Would have enjoyed speaking with Corbyn and hearing what he has to say. Maybe next time. If you're in the area, check it out. Should be fun. Even for friends who give first preferences to different candidates.
Posted by Thom Brooks at 7:32 pm No comments:

Interviewed on Al Jazeera's Inside Story - Chaos in Kos: Greece on the frontline of migrant crisis

Interviewed today for Al Jazeera's flagship daily programme "Inside Story" on EU migration and the crisis in Kos. The video can be watched HERE.﻿ 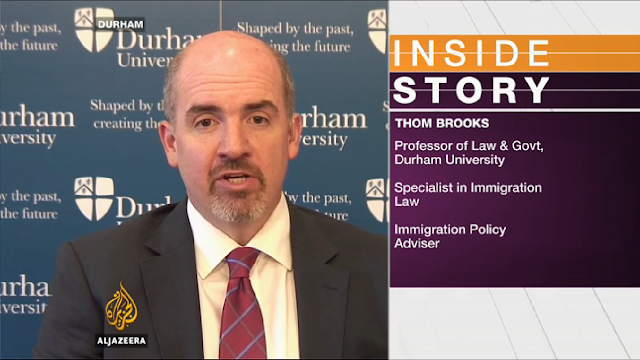 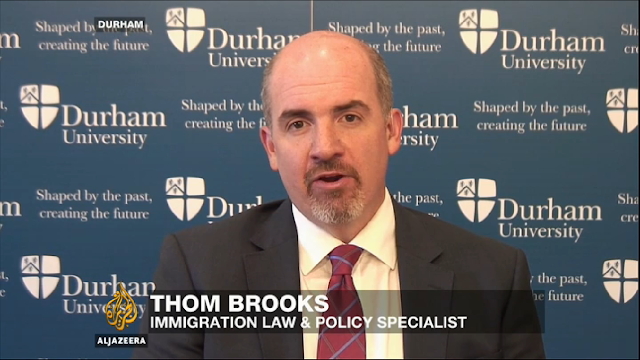 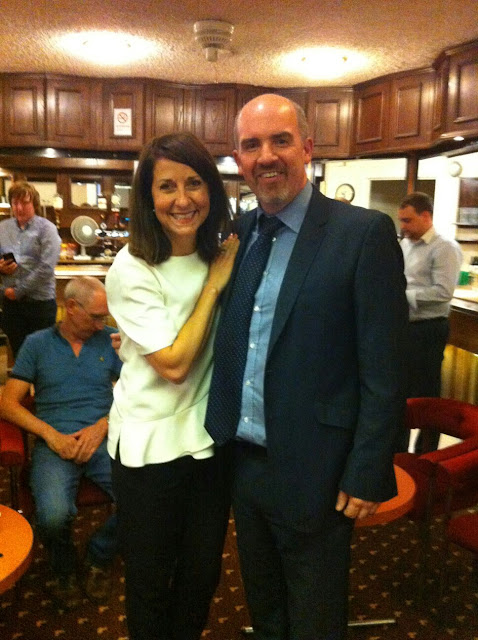 Great to meet Labour leadership contender Liz Kendall MP at a special meeting of the Sedgefield CLP in Newton Aycliffe last night. Liz was terrific and spoke to a full house.

. . . is the title of my new column for the Newcastle Journal, the UK's regional newspaper of the year. READ MORE HERE.
Posted by Thom Brooks at 11:34 am No comments:

Honoured to be included in Debrett's People of Today

"Established in 1982, People of Today annually recognises over 20,000 individuals who are positively influencing Britain and inspiring others through their achievements and leadership" (from website). 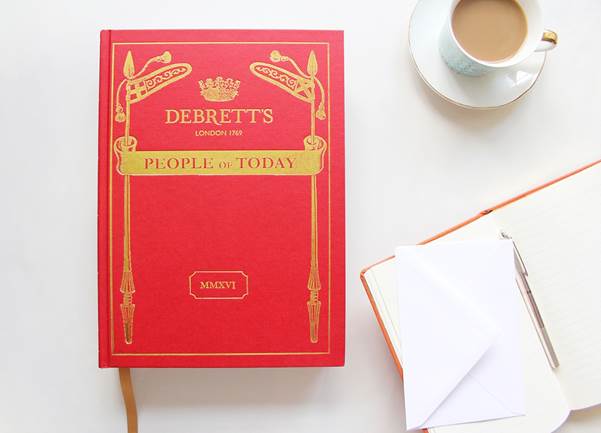 Posted by Thom Brooks at 3:50 pm No comments:

What happens to failed asylum seekers?

. . . is the title of today's headline piece for BBC Magazine online. A great essay on an important topic - and pleased to be quoted in it about why the government's fast-track system was rejected by the UK courts. READ MORE HERE.
Posted by Thom Brooks at 8:41 am No comments:

David Ingersoll, Behavioralism and the Modern Revival of Legal Realism

. . . is the title of my latest piece, published in the Beijing Law Review. This journal is open access so free to download here. An abstract:

David Ingersoll’s essay “Karl Llewellyn, American Legal Realism and Contemporary Legal Behavioralism” is a significant, but neglected contribution to our understanding of legal realism in the United States. This article argues that it first anticipates the shape of legal realism’s revival today and shows that Ingersoll was ahead of his time. The once dominant school of legal realism had become a much maligned theory of law when this essay was first published. Ingersoll identifies two varieties of legal realism and most critics focus on only one of them. He argues that legal realism should be revived if it develops its second variety often overlooked which accepts rule skepticism and recognizes the importance of social psychology to predicting legal outcomes more reliably.

I'm conducting research for a book Becoming British forthcoming with Biteback. The book is about how UK citizenship works and how it should be reformed. I'm keen to hear the thoughts of both British citizens and non-UK citizens on this topic. The survey takes only 5 minutes and I'd be happy to speak further with anyone interested in a follow-up chat. Please let me know if you have any questions - and please forward the survey link to your networks!
Take THE BRITISH CITIZENSHIP SURVEY
Posted by Thom Brooks at 11:17 am 2 comments:

The British Foreign Secretary, Philip Hammond, is changing his mind daily about whether his government is in control of the current EU migration crisis in Calais and elsewhere.

Only about 24 hours ago, Hammond said that the UK government has got "a grip" on the situation in Calais and turned a corner. He didn't come armed with evidence, but had much tough rhetoric giving clear assurances that all was well.

Today, an interview with Hammond is being widely reported where he says that EU is being invaded by "marauding" migrants in language some will see as more inflammatory that Cameron's comment regarding the UK being "swamped" by migrants.

One day this week Hammond says all is under control. Now he says the European way of life(!) is under threat. So which is it, Foreign Secretary?

Looks like yet more evidence this is a government that has tough sounding talk on immigration, but few effective ideas. Another reason why they could do with advice from those of us who are migrants to the UK...
Posted by Thom Brooks at 1:11 pm No comments:

You can catch me HERE on Al Jazeera again on a panel interview discussing Calais migrant crisis. Interviewed a second time for TRT in Turkey - will post link when up.
Posted by Thom Brooks at 4:54 pm No comments:

. . . on the continuing Calais migrant crisis. Link to programme is HERE. 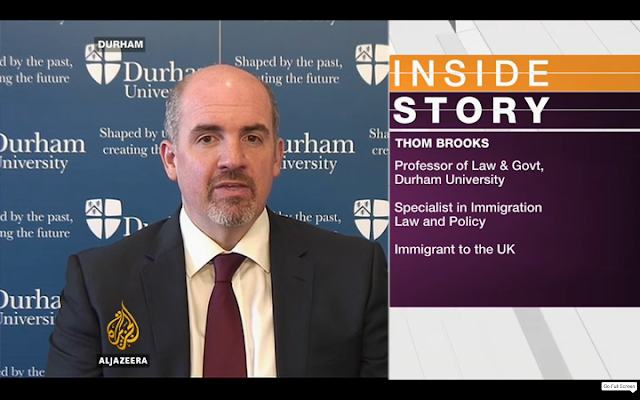 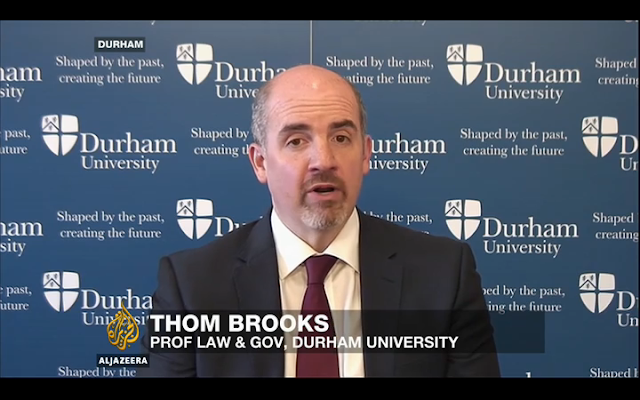 A link to my interview can be found HERE. 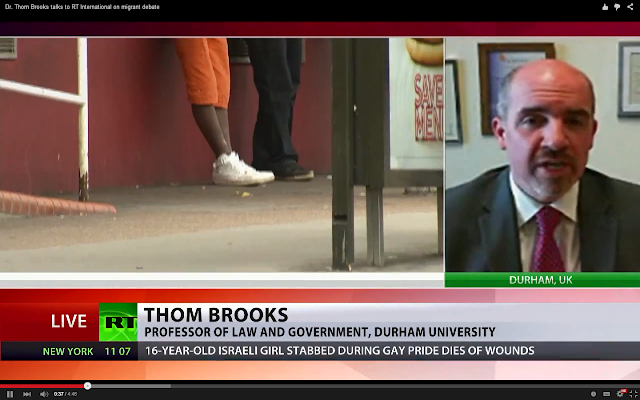 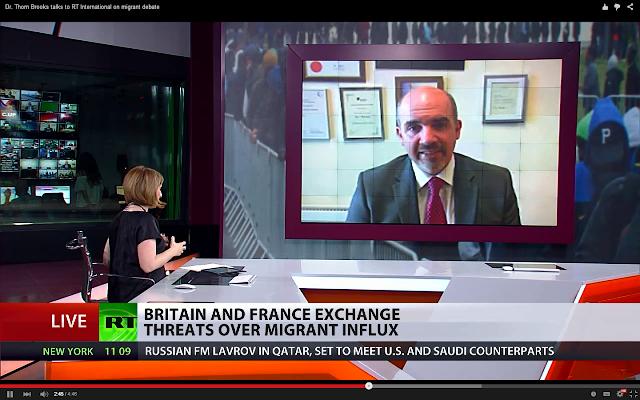 Posted by Thom Brooks at 2:39 pm No comments: 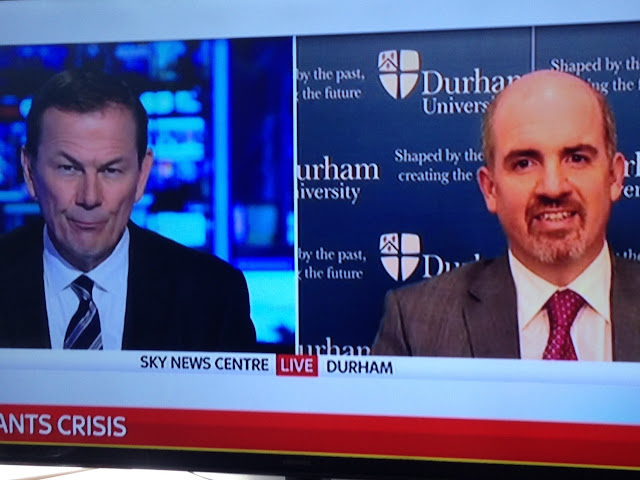 I've had a second Sky News interview this evening shortly after 5.30pm with Andrew Wilson. I was asked about Prime Minister David Cameron's new plans announced today that would see landlords forced to evict illegal immigrants -- effectively turning landlords into border agents. My view is simple: if the previous Immigration Minister in Cameron's government, Mark Harper, was mistaken to believe his cleaner was legally allowed to work in the UK (she was not and Harper swiftly resigned), then there is little hope others will do much better than him. Furthermore, these plans have not been shown to be effective: the current trial has not led to a single illegal immigrant being deported. This will do little to improve public confidence - and a poor attempt to divert attention from the continuing migrant crisis in Calais I've been talking about in several recent tv interviews.
Posted by Thom Brooks at 9:20 pm No comments:

UPDATED: My thoughts on the Calais migrant crisis 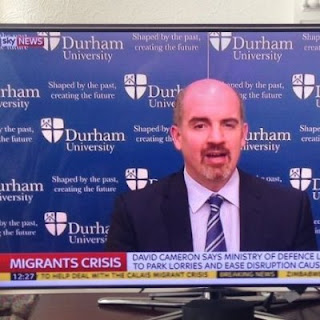 I've been interviewed by a number of media organisations over the last few days, including BBC News, Sky News, Al Jazeera (2x) and France 24 and several radio stations such as BBC Radio Newcastle (from 01:09:00) and BBC Radio Tees (from 27.30). 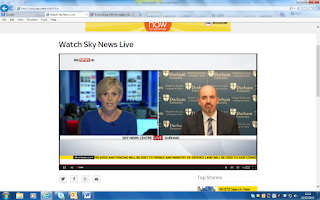 I've written a short post for the leading Labour Party blog LabourList on how the current crisis should be addressed. In short, there should be less finger-pointing and more cooperation at several levels. First, the UK and France must work more closely together to calm current tensions, but realise any measures are likely to only affect the short-term. Secondly, they should work together with their EU counterparts on a more effective strategy for handling asylum claims and tackling illegal human trafficking. If not, the Calais crisis will only continue for much longer. 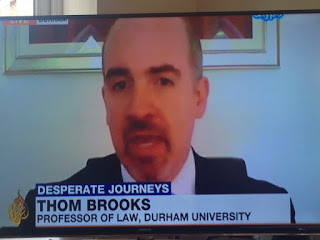 Posted by Thom Brooks at 2:50 pm No comments: