On Newsnight at Labour Party conference

Brief clip speaking on Marx and #Lab15 on @BBCNewsnight -- 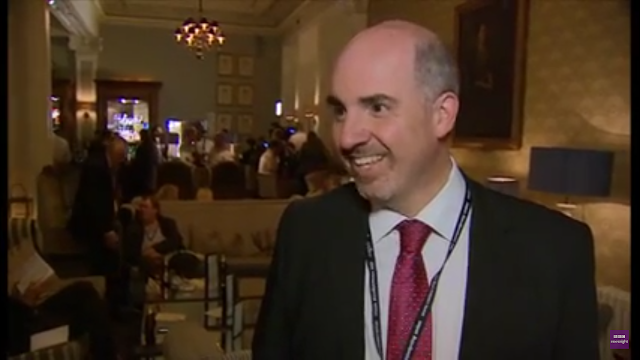 My personal website - http://thombrooks.info - received a new look recently and I've updated the links.
Posted by Thom Brooks at 7:44 pm No comments:

. . . is the name of my latest piece for LabourList on what kinds of immigration policies we might expect from a Corbyn-led Labour Party [DETAILS HERE].
Posted by Thom Brooks at 11:49 pm No comments:

Now time for the real campaign – and time to come together

....is the title for my new column for the top UK Labour Party blog LabourList. [READ MORE HERE]
Posted by Thom Brooks at 11:55 pm No comments:

EU migrant crisis: We have offered so little to those who have lost so much

. . . is the title of my new column for the Newcastle The Journal out today. LINK HERE.
Posted by Thom Brooks at 3:21 pm No comments:

Today it is widely reported that Jo Johnson is preparing a green paper setting out more radical proposals than have been anticipated. Johnson is perhaps best known for his being a Tory MP and the new Universities Minister than he is for being the brother of Boris Johnson, the London Mayor.

Johnson's concern is that teaching quality is too variable within and across universities with students receiving very different kinds of experiences. He has announced he will introduce a new 'Teaching Excellence Framework' that will provide students with more information about their studies and so, Johnson argues, drive forward competition in the sector.

So where to begin. No one can - or should - argue that it's crucial universities deliver excellent teaching and learning to students. There exist various league tables bringing together information like library spend per student, staff to student ratios and graduate employment.

There is also a National Student Survey that asks students from across all UK universities a whole range of questions. These now figure prominently in national league tables - especially the figure for 'overall satisfaction' - and they provide institutions with crucial anonymous open text comments about the positives and negatives experienced by students along the way.

It could be easily argued that students don't need even more data about university study. If anything, they're probably overcome by a proliferation of it.

While the government is concerned about a 'lack' of sufficient competition between institutions, this seems too one dimensional looking only at the fact the great majority charge the top rate of £9000 per year because they could recruit students willing to pay it. If the government truly wanted greater competition, then it should not only have lifted student quotas but also lifted the top rate of fees to see if going higher would lead to some being able to recruit despite charging more in fees. The fact so many willing to pay the current top rate suggests the government is stifling competition.

So what do students make of their education? The overall satisfaction rates are the wild envy of any government department. Universities scoring 90% or more satisfaction may not do well enough to make the top 10 in a particular field because others score even higher. Go on. Imagine the Home Office or 'BIS' with a satisfaction score that high. Too difficult? Thought so.

If Jo Johnson is so interested in value for money and delivering for students and taxpayers, then let's see two other satisfaction surveys. Let's compare the public's satisfaction with Johnson's department against student satisfaction at about any university in the UK. I'd bet the universities win hands down.

Or better: let's compare the satisfaction of academics working with the UK's research councils against student satisfaction at about any British university. Yes, that's a contest you'll never see because the councils would much rather worry about having the Universities Minister's confidence or that of university management than the confidence of the academics they serve and undertake the research projects. I'd like to be proved wrong, but fear I won't be.

A final point. The Teaching Excellence Framework is to be modelled on the Research Excellent Framework. The later is a complex exercise assessing research quality of departments through weighted consideration of their research outputs, impact and environment (roughly). It is cumbersome and highly time consuming. The 'TEF' looks much more than a quality control mechanism like an Ofsted report branding institutions excellent, good, etc. with each permitting tuition fees up to a particular threshold. Or so I'm reading the tea leaves.

This would make it very different from the REF - and also a bit pointless. It might be better for Johnson to focus more on not more information for students, but perhaps better information. Find meaningful statistics that can be used for genuine cross-institutional comparisons. And then let students vote with their feet on which institutions deserve their money. After all, it is the students that are going to university and not the minister.

It is impossible to see these proposals being rushed out with such thoughtlessness and not think here's yet another minister diving head first into an area he or she knows little about with the aim of making a change that gets some media attention so it raises the individual's profile helping him or her secure a much better ministerial position he or she actually really does want. If we must have a Tory in this position, I'm beginning to miss David Willetts. A lot.
Posted by Thom Brooks at 10:47 am No comments:

Talking about #Aylan & EU refugee crisis on @BBCTees from 42 mins - http://www.bbc.co.uk/programmes/p0309bmy #refugeecrisis
Posted by Thom Brooks at 9:35 am No comments: 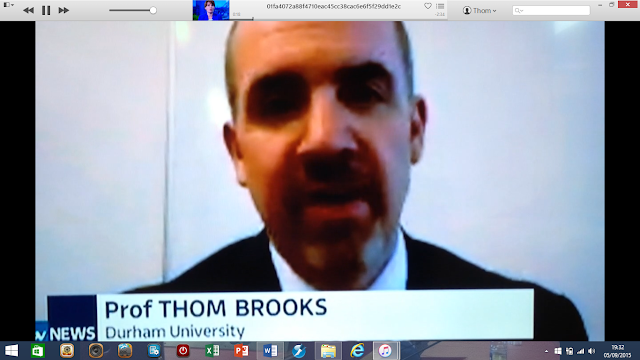 Interview conducted down the hallway from a fabulous conference I was attending in Ghent, Belgium - about 1 hour from Brussels. Link to be added when in hand.
Posted by Thom Brooks at 8:45 pm No comments: 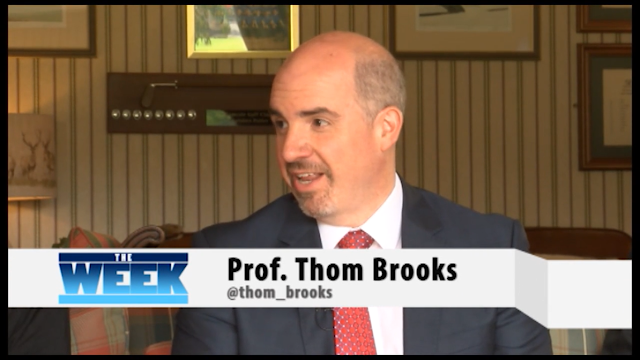 We discuss immigration, plans for local devolution and the big stories happening that week.
Posted by Thom Brooks at 8:34 pm No comments:

This piece is in the next issue of Newcastle's Evening Chronicle and The Journal following on from my big news yesterday READ HERE:

A Durham University academic has welcomed the changing of the planned EU referendum question after campaigning on the issue.

The Electoral Commission said the wording proposed by ministers - “should the United Kingdom remain a member of the European Union?” (which would prompt a Yes/No response) - could be perceived as biased to the status quo.

Durham University’s Professor Thom Brooks said he was pleased as he was one of only two academics quoted in the Commission’s report.

Professor Brooks said the wording was inconsistent with other recent referendum questions like the vote on AV nationally and the independence vote in Scotland. He argued that in both cases a vote for “yes” was for changes and “no” was for no change, and that this could mean the question is biased. The Electoral Commission agreed.

Professor Brooks said: ‘I’m delighted to see the Electoral Commission make these recommendations.
“This is an important vote and it’s crucial to get the referendum question right. It’s now up to the government to take the next step. But I expect they’ll endorse these recommendations in full.”

READ FULL STORY HERE
Posted by Thom Brooks at 12:56 am No comments:

The UK has a referendum next year on whether or not to stay in the EU. The Electoral Commission held a consultation inviting responses. I'm one of only two academics cited in the report. The other is Professor Matthew Turner of Warwick University.

"Another key factor that explained concerns about this [e.g., neutrality] was the use of 'no' to represent a change. Professor Thom Brooks of Durham University was concerned about the lack of consistency when compared to previous referendum questions:

[Quoting me:] There is a convention that the answer "no" should be reserved for a verdict of no change - and "yes" for a verdict of change. The problem with the current question is that a "yes" vote is a verdict for no change. This is inconsistent with referendums on AV nationally and on independence in Scotland".

The outcome? The Electoral Commission agrees that the wording should be changed to better ensure neutrality. They propose:

While I was not the only voice arguing for these changes, I'm absolutely thrilled to see this. Result! Now let's hope the final vote is worth celebrating, too....
Posted by Thom Brooks at 5:55 pm No comments:

. . . is my latest piece for Labour List READ HERE.
Posted by Thom Brooks at 5:34 pm No comments: