. . . is my latest for the Newcastle Journal (and published with the Evening Chronicle too) HERE. [[Read More]]
Posted by Thom Brooks at 1:11 am No comments:

The event of the week!

Join us for the Great British Pub Quiz - with questions from the British citizenship test and some surprises. Entry costs £2 - and open to everyone. A great night out and chance to see Phil Wilson MP.

The event is hosted by Thom Brooks - and sponsored by the Sedgefield Constituency Labour Party. 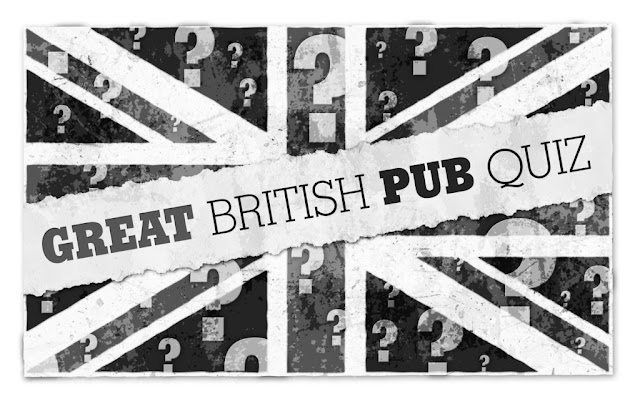 Posted by Thom Brooks at 4:25 pm No comments:

Andrew Vincent, "The Ideological Context of Impact"
This article sketches the ideological backdrop to deliberations on higher education over the last century; it then situates the concept of ‘impact’ within contemporary ideological debate. It argues, in the final analysis, that impact is an aspect of an anomalous ideological hybrid, still emerging in 2015, which remains worryingly capricious in terms of the way in which it is trying to reconfigure the character of university life. The article argues that political theorists should be critically alert to this reconfiguration.

James Alexander, "A Sketch of a System of Theory and Practice"
Most political theorists are committed to one particular view about the relation between theory and practice. It is argued in this article that there are in fact four possible ways of relating theory and practice, which are distinguished in terms of the answers that are given to two distinct questions. Derived from this is the suggestion that all political theorists can be classified according to whether they are sanguine, phlegmatic, melancholic or choleric. The purpose of this sketch of a system is to indicate the questionable nature of much of what passes for modern political theory – especially that of the now dominant sanguine tradition, which has for several decades especially concerned itself with the ‘impact’ theory can have on practice.

John Dunne, "The Impact of Political Theory"
Any systematic understanding of politics requires theory: an organised, if not necessarily self-conscious way of seeing and thinking about it. The point of studying and teaching about politics in universities is educational: to help others to understand it better and bring that understanding into their own lives and the lives of the communities to which they belong. Political theorists have a distinctive responsibility to recognise this and show those they teach and those with whom they work how to generate and organise better understanding of why politics is as it is and what it means for everyone's life. The competitive rating of performance to secure university funding deploys criteria that are intellectually absurd, politically disgraceful or deeply corrupting of intellectual and educational purpose. Whatever else they have managed to add to political understanding by their own work, every academically employed political theorist ought at least to have shown those they teach unmistakably why that is so.

Thom Brooks, "What is the Impact of Political Theory?"
I am very grateful for the contributions by Andrew Vincent, James Alexander and John Dunn to this symposium on ‘impact’ and political theory. Their papers provide insightful perspectives and different critical engagements with my recent piece for this journal. Their reflections force me to revisit my central argument that the impact agenda unveiled in the United Kingdom's new Research Excellence Framework (REF) need not be the negative development for political theorists that many fear – and perhaps even that it should be embraced. 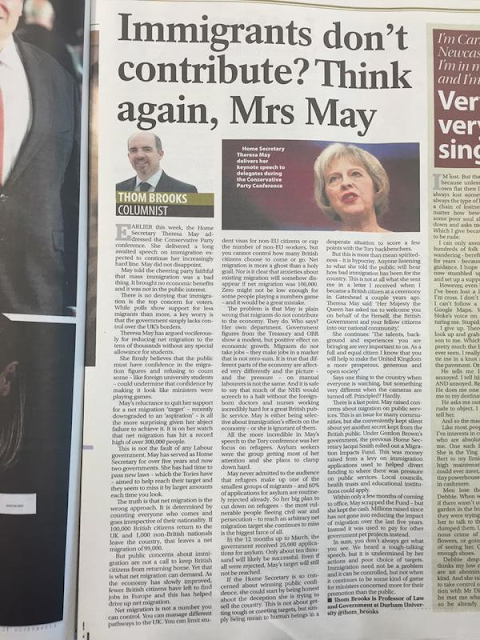 Posted by Thom Brooks at 8:53 am No comments:

The hypocrisy of Theresa May - in a letter

This is a letter Theresa May gave me when I became a British citizen welcoming me to the UK. Note the very different tone of this set against her very disappointing comments at today's Conservative Party conference. #Hypocrisy 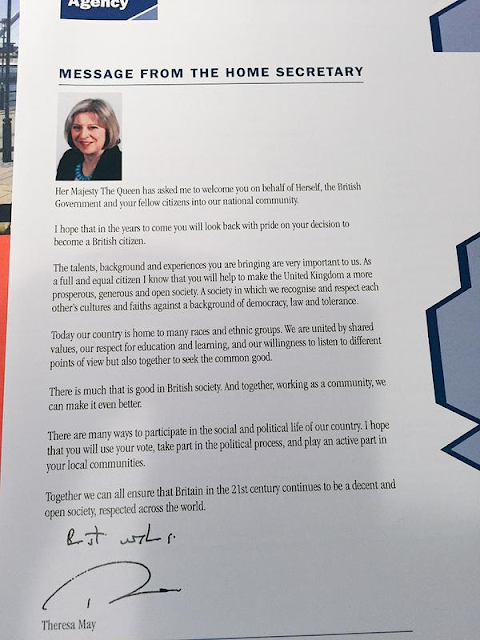 Posted by Thom Brooks at 2:03 am No comments:

My thoughts on Theresa May's immigration speech today. I didn't like it.

Full version is HERE at Progress Online.
Posted by Thom Brooks at 1:32 pm No comments: