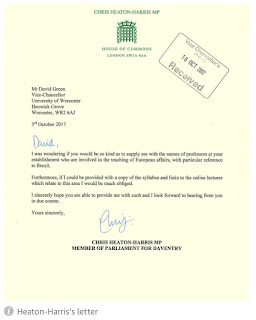 People being free to share thoughts and ideas on issues within society is one of the beauties of democracy. This week we learned that Conservative MP Chris Heaton-Harris wrote to university vice-chancellors requesting information about teaching on European affairs relating to Brexit, the name of individual staff teaching this subject, all materials used and links to classroom discussions.

As a professor of law and government & Dean of my law school at Durham, I am appalled at to see this, and know it could intimidate academics - making them feel like the government is monitoring them. No vice-chancellor should be forced to act on this request and that's why I'm calling on the universities minister Jo Johnson to make this clear through a statements.

Only a few vice chancellors have gone public. And thanks to them, this has been exposed. The letter has caused some parts of the press to call of information on "anti-Brexit" bias
Heaton-Harris is a junior government whip and it is claimed that he was researching for a book. He should not be using his political position, or the House of Commons letterhead in this way.

A clear statement from the universities minister, Jo Johnson, is required to bring this unfortunate matter to an end.

We, the undersigned, call on Jo Johnson, to contact every university vice-chancellor receiving the letter from Chris Heaton-Harris MP in writing to confirm that no university is required to release the information Heaton-Harris requested.

In so doing, he would reaffirm his government's commitment to academic freedom, debate, and the high quality of teaching standards at our country's higher education institutions. We are global leaders that should be championed not enemies to be silenced.
This petition will be delivered to:

Posted by Thom Brooks at 3:03 pm No comments:

Public Affairs Quarterly will publish a special issue devoted to the topic "Race and Public Policy."


Submissions on any philosophical topic concerning race and public policy will be considered.   Submissions should be in Microsoft Word format and should be double-spaced and prepared for blind review. The journal prefers manuscripts of 6,000-9,000 words in length but articles outside these limits may still be considered.  Articles intended for consideration for inclusion in this issue should be submitted by December 31, 2018 via the journal’s online submission process at http://ojs.press.illinois.edu/index.php/paq/. The deadline is far out (December 2018), so that people who are not currently working on a relevant topic still have time to produce a submission.


Questions about potential submissions should be directed to the Editor, David Boonin, at david.boonin@colorado.edu.
Posted by Thom Brooks at 8:25 am No comments:

Join me - and come work at Durham University's Law School!

Durham Law School is one of the UK's best law schools at England's third oldest university. We're at all-time highs in every category from 3rd g.p.a. in REF, 40th in QS World Rankings, 93% satisfaction in the National Student Survey and more.

Our graduates are in Parliament, in Government, two sit on the UK Supreme Court (the best outside Oxbridge) and leaders in UK firms and chambers. We're hiring NINE advertised positions linked below across wide areas of law. We even have a snazzy video.