Phillip Hammond is under new pressure to make Britain’s immigration system self-funded from its application fees and use additional surpluses for Brexit preparations. Immigration-related income raises over £2bn each year. The Home Office’s annual report of accounts for 2016-17 showed that at least £106m was spent on a consolidated fund on non-immigration matters.

The Home Office’s annual surplus earned from from border, immigration and citizenship services in 2014-15 was over £468m. This was large enough to cover an overall deficit of £266m leaving an overall surplus of more than £200m.

Professor Brooks says: “migrants are not a cash cow to be milked funding other government projects when we know there is much work to be done preparing for Brexit and new border security infrastructure, but also improving integration through new additional provision for English language support.”

Brooks is concerned that if no fundamental change is made in the budget then the government will be forced to look for new funding streams that may fall on general taxpayers. “The funding is already there in the system,” says Brooks, “The question is whether there is enough political will to act now before it is too late.”

If you have not booked a Globelynx feed before please call +44 (0)20 7963 7060 for assistance.
A broadcast quality ISDN radio line is also available at Durham University and bookings can be arranged via the Media Relations Team on the contact details above. The ISDN number is +44 (0)191 386 2749.

"It’s increasingly likely that any vote in Parliament will come in the final days – maybe final hours – before the March 2019 exit.

Instead of taking back control, Theresa May’s government is playing its own version of ‘deal or no deal’ giving MPs little choice over what Britain’s deal might be for a generation and little time to see any details to know what they are getting us all into.

The main issue a virtual civil war between different factions in the Tory Party rather than working with public in public interest, as if the public’s intentions for Brexit are clear or obvious from almost one year ago with no reason to work with the public instead of refusing to hear their aims, aspirations for the future and more.

I’ve never seen such breath-taking irresponsibility about a matter of such significance in my lifetime."
Posted by Thom Brooks at 9:12 am No comments:

Bringing Labour into a grand coalition team would give May new options in Brexit talks, me for The Times 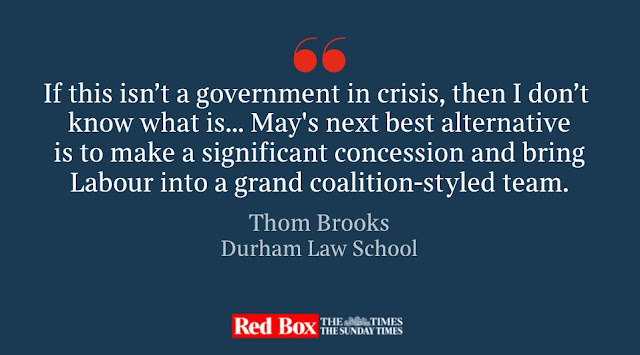 My latest column for THE TIMES
Posted by Thom Brooks at 11:14 am No comments:

"She should have been sacked, now Boris Johnson​ has to go" says Professor Thom Brooks​ as Theresa May​ says it's right Priti Patel​ has resigned over secret meetings in Israel.

Me live on RT
Posted by Thom Brooks at 11:06 am No comments:

NEW PAPER FOUND HERE. Abstract:
Eating meat can be ethical, but only when it does not violate rights. This requires that the ways in which meat is produced and prepared for human consumption satisfies certain standards. While many current practices may fall short of this standard, this does not justify the position that eating meat cannot be ethical under any circumstances and there should be no principled objection to its possibility.

Last week a letter sent to universities by a junior government whip was greeted by alarm by many academics for threatening academic freedom. The letter from Tory MP Chris Heaton-Harris was addressed to vice-chancellors and only exposed when the head of the University of Worcester made a copy public.


Universities were asked to produce lists of what teaching in European affairs relating to Brexit took place, the names of individual staff members teaching on EU matters and for links to lecture recordings. Heaton-Harris sent the request using House of Commons letterhead and only a few weeks before his colleague universities minister Jo Johnson MP later called for more free speech on campuses.


Heaton-Harris’s letter was variously described as ‘McCarthyite’ and ‘sinister’ and called ‘dog whistle politics at its worst’ by Professor Thom Brooks, the Dean of Durham Law School. Heaton-Harris supported Brexit. It was later rebuked by 10 Downing Street.


Today, Professor Brooks will submit a petition to the universities minister calling on him to write to all vice-chancellors contacted by Heaton-Harris and confirm in writing that none are required to release the information requested. The petition reads: ‘In so doing, he would reaffirm his government’s commitment to academic freedom, debate and the high quality of teaching standards at our country’s higher education institutions’. Over two thousand academics and supporters have signed the petition on Change.org.


Brooks says, ‘While neither the Prime Minister nor her minister appear to support Heaton-Harris’s request, both have not made clear to universities they can disregard the letter if they wish. We have the highest standards set for teaching quality and these should not be cast aside in pursuit of a political agenda’.


ENDS
Posted by Thom Brooks at 9:41 am No comments: