In 1996, I was starting my final undergraduate year at William Paterson University. I had begun a music major, but by graduation day I had double-majored adding a fifth year to complete all requirements for a BA in Music and Political Science. I was taught by several brilliant music professors -- Hugh Aitken, Jeffrey Kresky and John Link come to mind -- and several terrific political scientists like Martin Weinstein, John Mason, my advisors and close friends Steve Shalom and Maya Chadda.

The latter two - Shalom and Chadda - had been supportive of all my interests, including in political theory, but were big influences at the time in my looking critically at international relations with a specific focus on South Asia. My first work as a research assistant was for Chadda's book on democractization in India, Pakistan and Nepal (and first time my name appeared in any book when noted in the acknowledgements). If not for Steve or Maya, I would not have become an academic.

With my interests in political theory, IR and South Asian politics, I pursued various graduate programmes and came to apply to Arizona State University where I did my first MA in Political Science. A number of colleagues hugely impressed me - and still do - like Terence Ball (who joined in my second year), Jack Crittenden and Avital Simhony. But the main draw for me at that time was Joyotpaul ("Joy") Chadhuri.

Joy was brilliant, hilarious, engaging, supportive and eccentric in a majestic combination of these qualities and more. He nurtured my interests, but pushed me to explore the more philosophical side of political theory (as he had studied Philosophy earlier too). While I had taken a few Philosophy electives at William Paterson (including a highly memorable class with Daniel Kolak), I became far more serious about this at Arizona State.

He seemed to know something about everything. He was a proud Bengali who told me of how he lowered the UK flag at his school in India to raise the newly independent country's flag claiming that for Hobbes life might be "short, nasty and brutish" but in India it was "short, nasty and British". When he learned I had studied music and played guitar primarily, he reminded me of the Indian origins of the instrument as "singing wire".

He encouraged me to read philosophers and works that stay with me like Santideva on the ways of the bodhissatva and work by Nagarjuna exploring a wide range of Hindu and Buddhist figures, but also Jain and Islamic political thought. While I've meant to write at some point about Ibn Kaldoun's thought, Joy's teachings (and anecdotes) about Jain philosophy and allegories left a mark -- and I developed them in a paper on the ethics of meat eating published a few years ago in Think.

And being taught about non-violence from the Jain tradition as well as Buddhist traditions has had a profound effect on my thinking. Their different understanding about self-defence and opposition to all forms of violence (especially for Jain) plays a central role in a major paper (and probably short book) I'm working on about why the just war tradition is based on a mistake. (Wait for the paper to get the full picture - or invite me to give the paper to your department!)

At the time, few in class seemed to appreciate my points as I would challenge individualistic conceptions of the person and the good referencing figures from classical Indian thought. This became easier when I took my first class - with Avital Simhony - on Hegel and the New Liberals. It was there I first studied Hegel and TH Green quickly seeing that I could make similar kinds of points but through more familiar Western figures like Hegel. This has had a very strong influence on me, too. Later I would pursue a MA in Philosophy at UCD (under Brian O'Connor) and then a PhD in Philosophy a Sheffield (under Bob Stern) to continue working on Hegel, and the topic of my first monograph.

But my main interests were in Indian thought. My dissertation under Joy was a very unusual topic of epistemology in Socrates and Mahayana Buddhism noting the many comparisons. I've done little comparative work since, but have still dabbled in Indian philosophy publishing a few papers and I'm Notre Dame Philosophical Reviews main editor for work this area.

And don't jest about the dissertation topic. Years later at a Hegel Society of Great Britain conference at St Edmund Hall, Oxford, there were various talks exploring Hegel on religion. Several speakers compared and contrasted Hegel's insights with others like Nietzsche. I don't recall my specific argument, but I had raised an objection about a comparison between Hegel and Nietzsche noting their different views on Buddhism. During the coffee break, one of the conference delegates -- Dr Rowan Williams, then Archbishop of Canterbury (and a serious scholar on the reception of Hegel's theological work in the Russian Orthodox tradition) -- remarked that he thought my point was a bit unfair on Nietzsche. (And I never thought I'd hear something like that from someone in his position - but Rowan was and is a remarkable man.) Our conversation had ended with my saying that, while I was not a Buddhist, if I was, then I'd be a Mahayana Buddhist motivated agreeing more with their view of the self and other. To my surprise - and delight! - Rowan replied that he was not a Buddhist either (in case I needed reminding) but, if he had to choose, he'd be a Mahayana too. (And I most certainly never thought I'd hear anything like that - which only endeared me to him even more.) But if not for Joy, I might not have delved deep enough to appreciate the differences between the Mahayana, Theravada, Tibetan, Zen and other Buddhist traditions.

I'm sometimes asked about my close friendship with Martha Nussbaum at Chicago. This is another series of wonderful stories, but one core reason is our mutual interest in Indian philosophy that stays with me. Chadda gets credit (or blame) for first opening my eyes to this new world for me as it was then, but it was Chaudhuri that did so very much to encourage my passion and interest.

I served as a teaching assistant for Joy during my time at Arizona State. I supported his teaching political thought and a class he taught on "Legal Theory". This was my very first introduction to the subject (with the daunting challenge of having to mark undergraduate essays in a subject that I had not formally studied as an undergraduate myself). This has left a significant mark as I discovered how much I enjoyed jurisprudence which he introduced me to. After my MA, when I went to UCD, I took a class on jurisprudence (with Gerard Casey) and then, for my PhD, devoted a quarter of my thesis to Hegel on legal theory (comparing his views to those of Ronald Dworkin) and a further chunk to his theory of punishment. Joy gets much credit for introducing me to Hart, Austin, Dworkin, Fuller and more -- and, of course, many years later jurisprudence has become a part of my calling.

I further learned from Joy as a teacher. He taught the political theory core on my MA. This suited me beautifully as my interest - like his - was primarily historical and oriented towards non-Western ideas. So a class focused mostly on the history of political thought and ending with work on engaged Buddhism fit the bill. During this time, he fascinated me with the work of Dr Ambedkar, a hugely significant figure in India's independence.

I also sat his South Asian Politics class. This was more difficult. The class met Mondays, Wednesdays and Fridays for 50 minutes starting at about 7.30am. Joy would enter with his walking stick and little else. He would sit on the front table and, in an engaging conversational style, would enlighten as much as he would entertain.

Joy was also eccentric. He taught kung fu (if I recall) for many years and would regularly invite graduate students to punch his stomach to show his fitness. Of course, none of us dared as he was already nearing retirement at that time. But I know of one fellow student who agreed (happening after I left ASU) and, well, it didn't quite go as either imagined. But that was Joy. Full of life and ready for anything.

I owe Joy so much. He taught me more about curry than about anyone else long before I moved to England. He believed in me and my academic career at times I struggled to. At a time when I needed someone to champion me to support my continuing studies, Joy had my back. And he was a great example of how to be an engaged teacher.

I understand he has recently passed and saddened very much. Joy - I will miss you. And thank you. For everything. You touched my life and I am in your debt.

I'll end with a story he liked to tell. An old man was walking up a mountain. Along the way he lost various possessions including his mandala, his walking stick and more until it was just him alone - an blind - at the mountain's summit. "It was only then that he could see," Joy would say with his infectious smile. I very much hope Joy is in that same heavenly place.

Ok, one more. He also used to like a Buddhist parable where a man gave his life for his dog. (Joy loved his dogs.) And in so doing, he reached nirvana. Enjoy nirvana, Joy. 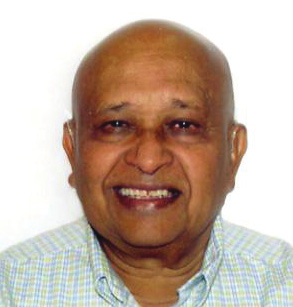 Posted by Thom Brooks at 5:56 pm No comments: